When it was time for Max Williamson to go off to college, there was no doubt about where he would be going. A well-worn path to a great education had been laid out for him, as the last in a family of 12 children.

A parade of his siblings had attended Bowling Green State University and they showed the way, while a generous aunt with a lifetime investment in higher education made certain that Max and his brothers and sisters had a home away from home during their time at the campus.

“My dad died when I was still pretty young, so one of my older brothers stayed home and worked the farm, but for the rest of us – the other 11 – we all ended up at Bowling Green,” Williamson said. “We found it to be a good place to go to school, and my aunt certainly played a big role in that. She didn’t have any children of her own, but she did a lot to make sure we got the chance to get a nice education there.” 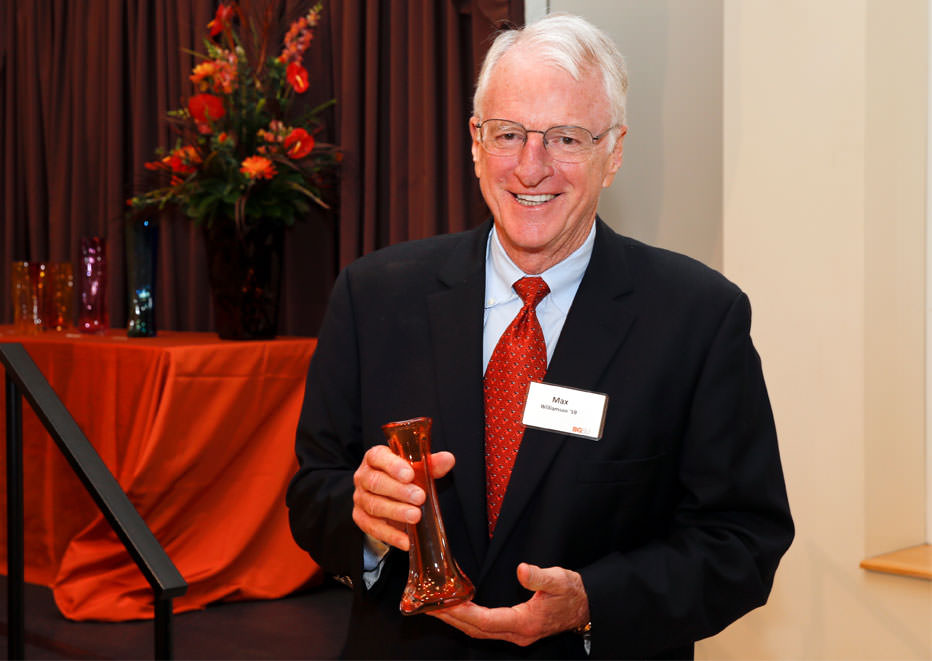 Williamson, 77, attended BGSU from 1955-59, graduating with a degree in general business. He is retired now after a long career in the insurance industry, and splits his time between a home in Columbus and a winter residence in Florida, but he maintains a strong association with the University.

In fall 2016, Williamson began a four-year term as chair of the BGSU Foundation, Inc. having previously served two terms on the foundation board, and as president of the alumni board in the 1980s.

“There’s no question that I have a special affinity for the place,” he said. “Just with the family connection we’ve had, there is a very strong tie there. Bowling Green was obviously a big influence in our lives.”

The family link started with his aunt, Dr. Florence Williamson, who was one of the first women to earn a Ph.D. in education from Ohio State. When she began teaching here in the 1920s, it was still called Bowling Green State Normal School.

The woman the Williamson children called “Aunt Flo” taught graduate and undergraduate classes at Bowling Green, served as adviser to the Delta Gamma sorority chapter and was a breast cancer survivor, and an iconic figure on campus for decades.

“She was a very strong, very stately lady, and she always stacked her hair on top of her head and that made her look really tall, like she was six-foot-six,” Max recalled. “We lovingly called her Aunt Flo, and when the other students heard that, they picked up on it right away.”

Aunt Flo had a house very close to campus, so beginning with Larry, the eldest of the Williamson siblings, she offered free room and board to any of her nephews and nieces who wanted to leave the family farm near Cedarville, in southwestern Ohio, and go to college.

“You had your own room, and she would make meals in the evenings and on the weekends,” Max said. “She was just very generous, and very welcoming. The house was never locked, and we could come and go as we pleased. Looking back, it was a pretty good deal.”

So after Larry, John followed, and then Frances, the oldest sister they called Frankie. Then came Myron, Nancy, Donald, Janet and Mildred. Bob was next in line, but he stayed home to tend to the farm. Kent resumed the steady stream of Williamsons headed to Bowling Green, and was followed by Walker, and then Max.

Not all of the siblings stayed long enough to graduate, but many did. Nancy was the most persistent of the bunch, returning after 20 years to earn her degree, and then become a home economics teacher in Sylvania.

“Everybody did it before me, so I did it, too.”

Max recalled a conversation he had with his mother late in the summer that followed his senior year of high school.

“She asked me what I was going to do, and told me that I had better talk to Aunt Flo about college,” he said. “My aunt said that she would be leaving for Bowling Green in the first week of September, and that I could ride along. So my brother Walker, who was already going to school there, and I rode with her to BG.”

Max walked in to the admissions office on campus, signed up, and paid his $112 semester fee with money he had saved from his part-time job at a grocery store.

“At that time, there was no application, and no test scores. I probably couldn’t get in there now,” he said.

Once he arrived in Bowling Green, Max went to work at the student union, and held down jobs throughout his time in college. He said Aunt Flo never pressed any of her houseguests about their schoolwork.

“She was a very highly educated woman, but she never put pressure on us,” he said. “She was never demanding, and she never asked us about our grades. She always told us, ‘Don’t let your studies interfere with your education.’ She was very kind, very willing, and she provided us with a comfortable environment, and did it out of the goodness of her heart.”

Before Max started his senior year, Aunt Flo retired from teaching, sold the house in Bowling Green, and moved back to Cedarville.

“All of a sudden, I had to make other housing arrangements,” Max joked.

Many years later, when Max returned to BGSU for a homecoming weekend, he found a flyer for a local pizza place on his windshield as he left the parking lot at Doyt Perry Stadium. He discarded the brochure and drove his wife toward the center of town so he could show her where he and his siblings had lived with his aunt while they were in school.

“As we crossed the tracks on Court Street, I saw that Aunt Flo’s house was gone, and right where it used to sit was the pizza place.”

Yes, Bowling Green had changed a great deal in the years since Max first arrived. But that bond first forged with the Williamson family more than 60 years ago remained strong.

“I always felt like it was a great place, but then I had a grand-niece from Chicago who started at the University of Illinois, but transferred to BG to get a degree she could not get at Illinois,” Max said. “That meant a lot to me, and it kind of reinforced that feeling that this place was something special.”

With much smaller families the norm today, Max agrees that the Williamson legacy at Bowling Green will be a tough one to match. Four of the siblings are still living, and when they manage to get together, the subject of Aunt Flo and the deeply rooted BG connection is bound to come up.

“When you grow up in a big family like that, you don’t know the difference, but I certainly wouldn’t want it any other way,” he said.

“My brothers and sisters blazed that trail for me, and since then there have been nieces, nephews, grand-nieces and grand nephews, and even more extended family beyond that, and a lot of them have gone to Bowling Green. It’s a good place where you can definitely get a good education, and we’ve sent a few people there, that’s for sure.”