The BGSU Philharmonia will welcome violinist Noah Bendix-Balgley, concertmaster of the Berlin Philharmonic, for a return guest appearance Nov. 14. The program will feature two well-known pieces by Tchaikovsky, his Symphony No. 5 and Violin Concerto.

The 8 p.m. performance will take place in Kobacker Hall at the Moore Musical Arts Center. A pre-concert talk on the music of Tchaikovsky will be held at 7:15 p.m. in Bryan Recital Hall. 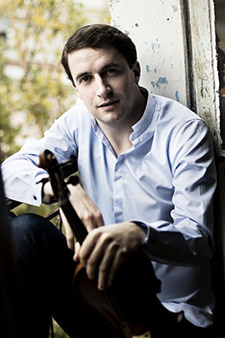 “We are absolutely thrilled to have Noah visiting Bowling Green to perform with the University's orchestra, the BG Philharmonia. As one of America's great violinists, having reached the pinnacle position of concertmaster of the world-renowned Berlin Philharmonic, he is an exceptional representative of the best our country has to offer in the classical music scene,” said Dr. Emily Freeman-Brown, Professor of Creative Arts Excellence and BGSU director of orchestral activities.

The opportunity for BGSU students to work with Bendix-Balgley is of great value, said Dr. William Mathis, interim dean of the College of Musical Arts.

“Music students in the CMA have multiple opportunities to work with professional musicians throughout their degrees, but to have someone of Mr. Bendix-Balgley’s stature is a special treat to be sure,” Mathis said. “The impact of rehearsing, interacting and performing with a world-class artist is significant, motivating and inspiring — our students will never forget this experience. I daresay that the audience will never forget this concert, either.”

Bendix-Balgley has built an international reputation as a violinist, appearing as a soloist with leading orchestras and in festivals winning top prizes in competitions in Europe and the United States. From 2011-15, he was concertmaster of the Pittsburgh Symphony Orchestra. His debut recital in Pittsburgh, in which he performed his own cadenzas to the Beethoven Violin Concerto, was named “Best Classical Concert of 2012” by the Pittsburgh Post-Gazette. He also performed his own version of “The Star-Spangled Banner” for the Pittsburgh Pirates on opening day in 2013 in front of 39,000 fans.

As a chamber musician, he has toured North America with the Miro String Quartet and, from 2008-11, was first violinist with the Munich-based Athlos Quartet, which won a special prize at the 2009 Felix Mendelssohn-Bartholdy Competition, in Berlin, and performed throughout Europe.

An eclectic musician, Bendix-Balgley has a special interest in klezmer music and has played with klezmer groups and taught klezmer violin at workshops throughout Europe. Last June he premiered his own Klezmer Violin Concerto with the Pittsburgh Symphony Orchestra.

Born in Asheville, N.C., he began playing violin at age 4 and by the time he was 9, was accomplished enough to perform for renowned violinist Lord Yehudi Menuhin, in Switzerland. He plays on a Cremonese violin made in 1732.

Tickets can be purchased from the BGSU Arts Box Office at 419-372-8171 or visit www.bgsu.edu/musicevents. Advance tickets are $7 for adults and $3 for students and children. All tickets purchased the day of the performance are $10. Admission is free for BGSU students with a canned-good donation and University ID.