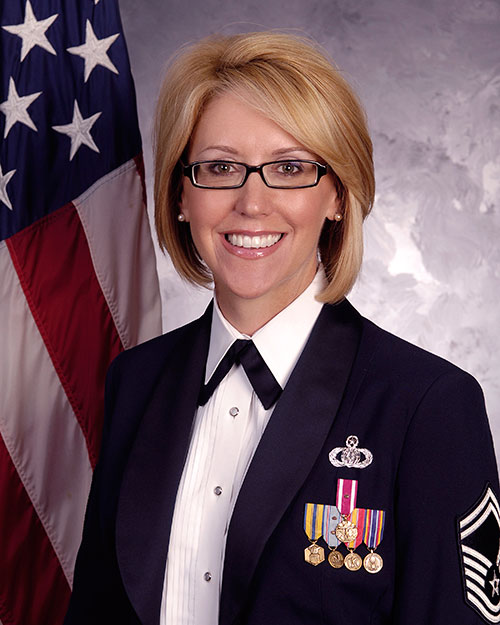 Since she was 8 years old, singing in neighborhood garages, Christine (Adamick) Germain ’95 has loved to perform. It is a passion that brought her to Bowling Green State University and motivated her to join the Air Force Singing Sergeants. On Oct. 24, that passion will come full circle as she performs with the Singing Sergeants in Kobacker Hall of the Moore Musical Arts Center.

“You don’t ‘choose’ music,” Germain said about her career. “It is something that chooses you.”

Germain chose BGSU because she wanted to go to a university that had “the full college experience.”

“I wanted a big school feel without the big city,” she said. “I immediately fell in love with it when I came out to visit. I met a wonderful person at the Visitors Center who guided me throughout the process. Little did I know at the time that that person would become my ‘big’ sister in my sorority later on.”

Germain came to BGSU from Newington, Conn., to major in music education, but performance was her real love. After attending a performance of the Air Force Singing Sergeants in 1994, she auditioned.

The U.S. Air Force Concert Band and Singing Sergeants, which will perform at BGSU later this month, are two of the six performing ensembles within The United States Air Force Band. Stationed at Joint Base Anacostia-Bolling in Washington, D.C., the Air Force Band honors those who have served, inspires American citizens to heightened patriotism and service, and positively impacts the global community on behalf of the U.S. Air Force and the United States of America.

“I was still preparing to teach music until I found out I got the job in February 1995,” she said. “I had never heard of performing opportunities in the military, so it wasn’t anything I had considered before, but I went to basic training in June immediately following graduation.”

Germain went with her best friend, Kim Gerber, who also auditioned for the group. An extra position was created so that both of them could participate.

Now, Germain is Senior Master Sgt. Germain, a soprano vocalist and the superintendent of the Singing Sergeants. She was a founding member of the Joint Base Anacostia-Bolling Middle Tier Council, a member of the Washington Area Top 3 and a distinguished graduate from the U.S. Navy Senior Enlisted Academy. Her Air Force career highlights include performing the national anthem at Super Bowl XLVIII and Super Bowl 50 and singing at the funerals of former presidents Ronald Reagan and Gerald Ford.

“I get to serve the country and do what I love,” she said. “It’s been a life-altering experience. It’s amazing what our troops give to this country; I wish more people could really understand what they give, because it’s immense.”

Performing is only part of the Singing Sergeants’ contribution to the Air Force and country. They boost morale, support recruitment and retention, honor veterans, inspire patriotism and serve a role in diplomatic relations.

“It’s overwhelming to think I am a part of it all,” Germain said. Her husband, Paul, retired from the Air Force four years ago.

While at BGSU, Germain was an active member of Sigma Alpha Iota music sorority and Alpha Phi sorority. In addition, she was awarded the Helen McMasters Scholarship for Education in 1994, the College of Musical Arts’ Vocal Talent Award for three consecutive years and the Bowling Green Women's Club Talented Artist of the Year award. She also performed a variety of roles with the University’s Opera Theater.

“Bowling Green was the highlight of my young life,” Germain said. “There were so many ways to become involved on campus and to meet people – there just simply wasn’t enough time to do it all. Some of my most fond memories are with the friends I met at the school of music, to include my professors.

“My Alpha Phi sorority sisters were also a huge part of my experience at BG. I lived in the house for two years and had great fun with them learning about the importance of philanthropy and supporting each other through our college lives. I still talk to many of them to this day and a bunch of them are coming to the show, some that I haven’t seen in 22 years.”

Prior to joining the Air Force Band, Germain performed as a resident artist with the Toledo Opera Company and made several guest appearances with the Black Swamp Players Theater of Ohio. In 2012, she was awarded Alpha Phi International Fraternity's "Ursa Major Award" for professional achievement.

The United States Air Force Concert Band and the Singing Sergeants will perform at 7 p.m. Oct. 24. The event is free, but tickets are required.