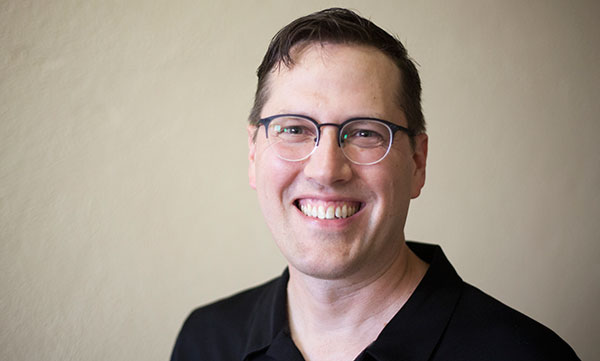 Dr. Jonathan Chambers, graduate coordinator in the theatre and film department, has been named the recipient of a Betty Jean Jones Award. Presented by the American Theatre and Drama Society, the award is named after Jones, a highly respected and admired American Theatre and Drama teacher and professor at the University of Michigan. The award that bears her name honors individuals who have achieved excellence as college/university teachers and/or scholars and have served as mentors in the profession. It will be presented Saturday (Aug. 13) during the association’s annual conference in Chicago.

From the letters of support and admiration by his nominators, it is clear that Chambers meets those criteria and more.

The letters came from former students, a number of whom have gone on to become theatre faculty members, and from professional colleagues. Among his nominators were Dr. Heidi Nees, a BGSU theatre Ph.D. alumna who is now an assistant professor of theatre at California Polytechnical University, and Dr. Scott Magelssen, a former BGSU faculty member and collaborator with Chambers on several teaching, scholarly, and service projects and now associate professor in the School of Drama at the University of Washington.

Dr. Christine Woodworth, an assistant professor of theatre at Hobart and William Smith Colleges, was Chambers’ student both as an undergraduate at St. Lawrence University, where he taught from 1996-2001, and, later, at BGSU, where she joined the doctoral program in theatre. She recalled a seminal moment in her career both as a student and theatre professional when Chambers read to an undergraduate Production Workshop class a conference paper he was about to present that happened to be on the very play the class was in the process of rehearsing.

“Here was this beautifully written, challenging prose that examined this play in ways that made it completely unfamiliar,” she wrote. “We were lifted up and out of the rehearsal studio and into this world of words that enabled us to look at this play we thought we knew so well, in wholly new ways. I can remember distinctly where I was sitting that day, clustered around the director, feeling rather confused by the language of theory that was rolling off the page. I also had a strong sense that a door was being cracked open for us and we were given a chance to peer into a world of scholarship that we never knew existed.”

Echoing what other nominators said, Woodworth noted that part of the beauty of Chambers’ work as an educator is that “not only does he challenge and inspire you in the moment, he leaves traces of his influence on your life in ways that reverberate for many years to come.”

Chambers’ pedagogical style has proved a model to his former students, both undergraduate and graduate, who cite his ability to promote artistic collaboration in a supportive team environment while also maintaining an atmosphere of robust scholarship. He lays out clear expectations, they said, and encourages research to deepen and enhance students’ understanding of their artistic subjects.

His humor and warmth help, they said. “To create a classroom environment in which 18th- and 19th-century dramatic theory comes alive for doctoral students not specializing in those areas and remains memorable over a decade later is no small feat,” Woodsen wrote. “He modeled for each of us the pedagogical value of pairing rigor with humor in the classroom.”

Chambers has “continuously bridged what some perceive as a gulf between scholarship and artistry,” she said. “Holding a Master of Fine Arts in acting from Virginia Commonwealth University, Jonathan has taught numerous performance classes, ranging from beginning acting courses to advanced work in physical theatre and non-realism, Greek tragedy, character and range, and group performance of non-dramatic texts. It should be noted that many of these courses—which he still regularly offers—are for undergraduate students. He has maintained his commitment to undergraduate education while also teaching within the demanding curriculum of the graduate program and, for many years, serving as graduate coordinator. The graduate courses he has taught while at BGSU have included critical theory surveys, theatre history courses, and specialized topics that bridge scholarship and artistry such as courses in modernism, postmodernism, and directing theory. He also regularly teaches courses in research and publication.”

Additionally, he supervises the Graduate Seminar, which he crafted into a forum for graduate students and faculty that offers concrete and productive connections to the production program; pragmatic workshops on conference presentations, interviewing for academic positions, balancing the myriad demands of an academic life; and a venue for sharing and receiving feedback on works-in-progress.

His strengths and influence as a teacher, artist-scholar and mentor are also reflected by the sheer number of theses, portfolios and dissertations that he has either chaired or served as a committee member, Woodsen said. He and a BGSU colleague have also created a short-term study abroad program in London that they continue to lead every other year.

Chambers’ directing credits range from 18th-century laughing comedy (“She Stoops to Conquer”) and comedy of manners (“The Importance of Being Earnest”) to contemporary musicals (“Urinetown”) and provocative dramas (“The Seagull,” “Blue/Orange,” “Quiet in the Land”).

A prolific scholar, he has written a well-regarded book, numerous book chapters, journal articles, essays and reviews of books and performances. He also has a strong record of service to his profession and in academia, including as president of the American Theatre and Drama Society.

As his professional colleague Dorothy Chansky wrote, “Jonathan models every good thing I can think of in a theatre scholar, colleague, editor, mentor and teacher.”