“Once I got to Bowling Green and got into the flow of things, everything just kind of clicked...ROTC was a facilitator in that”College life can be a transformative time for students. Its inspiration can come from just about anywhere.

For Jeff Sowecke ’07, it was the Reserve Officer Training Corps (ROTC) program at Bowling Green State University. He admits to not being engaged academically during his high school years while growing up near Cleveland in Brecksville, Ohio, but he felt an instant connection with ROTC during his freshman year.

“Once I got to Bowling Green and got into the flow of things, everything just kind of clicked,” said Sowecke, a captain in the U.S. Army who majored in criminal justice at BGSU. “I think ROTC was a facilitator in that, and in the end ROTC was truly an overall great experience for me. 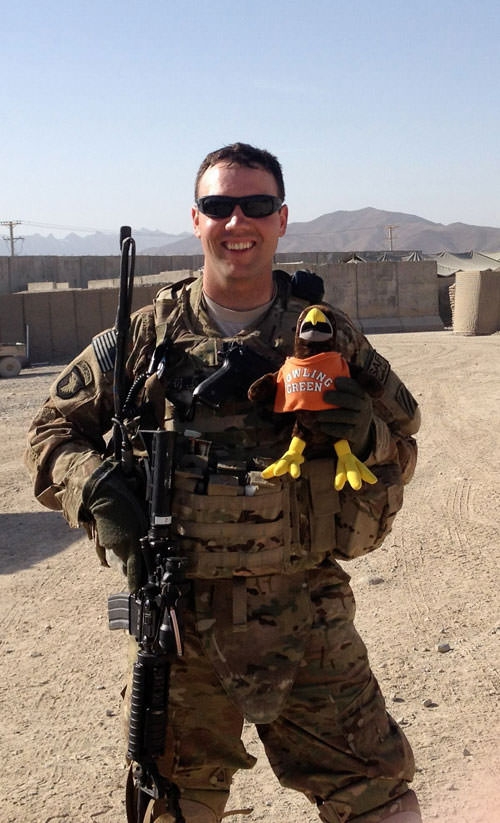 “Often you see cadets running around campus in their uniforms and I’m sure many have wondered what they’re doing. At the end of the day, they are learning a truly unique set of leadership skills that have served as the foundation of my leadership throughout my entire Army career.”

Sowecke, 30, has been in the Army for nine years. He was recognized for his leadership skills June 1, when he was presented with the General Douglas MacArthur Leadership Award. More than 65,000 Army officers were eligible for the award and only 26 were recognized.

Following his four years in ROTC, Sowecke was commissioned as a second lieutenant after graduating from BGSU and immediately entered active duty.

“Eventually within ROTC, you have to sign a contract with the Army,” he said. “I tried it out for the first year when I was a freshman with no commitment, and then the summer between my freshman and sophomore years the Army offered me a full scholarship, which covered all of my tuition and books and I received a monthly stipend. It was a very nice deal. Upon graduating, you start serving your time in exchange for the scholarship.”

After graduation, Sowecke attended a series of training courses over a course of six to seven months before reporting to Fort Campbell, Ky., in January of 2008. Then, he was immediately deployed to Iraq.

“It was an eye-opening experience going from living the dream at Bowling Green to leading 30 soldiers in combat,” he said. “The learning curve was substantial.”

Not long after taking this position, he was deployed again to Afghanistan.

“During my first deployment I was leading 30 soldiers and I was now leading 110,” Sowecke said. “It was a challenging yet incredibly rewarding experience.”

“Often you see cadets running around campus in their uniforms and I’m sure many have wondered what they’re doing. At the end of the day, they are learning a truly unique set of leadership skills that have served as the foundation of my leadership throughout my entire Army career.”For the past two years, he has taken on a completely different mission by serving as company commander at an international seaport, the Port of Bremerhaven, in Germany.

“As opposed to leading soldiers, which is who the majority of military officers and leaders lead, I actually have a workforce consisting of German civilians,” he said.

Sowecke is responsible for any military shipments across all seaports in Germany, Poland, the Baltic States and Scandinavia.

“Anytime there are maritime surface movements for the Department of Defense or NATO, it falls under our responsibility,” he said. “Basically, any sea shipment that comes in and out of the ports in northern Europe, we facilitate and operate those operations.

“It’s a unique assignment for an Army officer. I never imagined having earned a degree in criminal justice and joining the Army and that I’d one day live in Germany while leading a workforce of German civilians in overseeing seaport operations.”

Sowecke said his current assignment has been a once-in-a-life opportunity, and a culmination of all his training.

“My overall experience in the Army, everything from training to my experience leading soldiers in both combat and noncombat environments to where I am now, working alongside our NATO counterparts, have all shaped me into the leader I am today,” he said.

Sowecke said that anytime a U.S. or NATO unit deploys to Europe they have to ship their equipment and there are a lot of logistics and moving pieces that coincide with the shipments, which falls under his responsibility.

“Over the past two years the Army has increased its strategic focus on reassuring our European allies," he said. "This has resulted in a substantial increase in movement operations throughout our area of responsibility. Through that, our organization has gained a lot of visibility not only within the U.S. Army, Air Force, Navy and Marines, but also our NATO allies, which I believe has contributed to having earned the MacAurthur award.”

Sowecke said he doesn’t view the award as a personal achievement but rather a collaborative recognition of the hard work and dedication put forth by those he has served with.

“As a commander, you accept all responsibility within your organization: good, bad and ugly," he said. "I, along with many leaders, would argue that a leader is nothing without the people that make an organization work. Receiving this award was truly an honor and is a testament to those who have dedicated and sacrificed so much to ensure mission success.”

Sowecke has done a lot of traveling in the Army and he has been deployed to combat three times, but each time he has deployed he has taken a little piece of BGSU along for the ride.

“I have this Freddy Falcon stuffed animal that I’ve had ever since I graduated — I think my little brother gave it to me as a gift — and that thing has stuck with me throughout my entire Army career,” he said. “Every single deployment I’ve been on, Freddy would be by my side, even during a few operations.”