Two student-athletes are recognized for their outstanding accomplishments

Being a student-athlete at BGSU means more than competing at a high level each day. Falcon student-athletes represent the University in a variety of ways, and are expected to lead by example while demonstrating the values of BGSU.

While this expectation applies to all 411 student-athletes, there are a few senior athletes who have consistently exceeded what was asked of them in the areas of scholarship, athletic talent, leadership and service. For their exceptional efforts, these individuals are awarded the prestigious Falcon Medal of Honor.

The Falcon Medal of Honor defines the essence of the qualities BGSU holds important for all of its student-athletes. This award is given to two senior student-athletes (one male and one female) who have risen to the top in each of these areas among their peers. It is awarded at the annual Athletics Honors Night — The Ziggys — in the presence of fellow BGSU student-athletes and others in the Falcon Family.

It is easy to imagine the difficulty in selecting the awardees due to the exceptional talent, commitment and determination that characterizes all Falcon student-athletes. This year, Ryan James, of the Men's Soccer team, and Alyssa Nocella, of the Gymnastics team, earned the highest honor given to a student-athlete. Each of these students embodies the values of BGSU and demonstrates them daily.

James impacts all he encounters 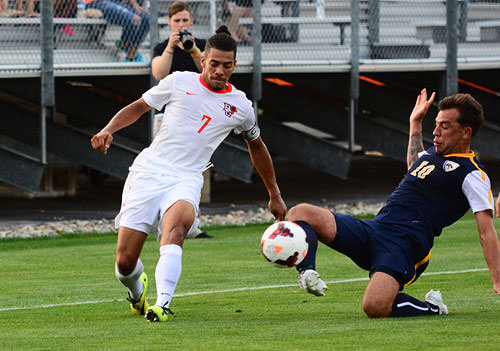 By simply looking at Ryan James’s career stats, there is little doubt about his remarkable athletic ability on the soccer field.

As tri-captain of the 2015 Falcons, he started all 19 matches and tied for the team assists lead. He also had 13 points on four goals and five assists in his final collegiate season, and played in all 79 of BGSU's matches during his career, making 69 starts. Over his time at BGSU, he racked up 33 career points on nine goals and 15 assists. His athletic accomplishments made him an incredibly qualified candidate for BGSU's Male Athlete of the Year award, as well as earning him a spot on the All-MAC Second Team.

Beyond his impressive athletic performance, James has also proven himself academically. He was named to the Academic All-MAC Team in 2015 and also named a MAC Distinguished Scholar Athlete for the second straight year.

“Ryan is one of the most talented players to ever come through our soccer program, and at the same time one of the most humble,” said head coach Eric Nichols. “It is rare for a player with so much athletic ability to be as coachable as Ryan is. Not only has this allowed him to reach the highest levels of soccer, but it has been an invaluable model for all of his teammates to follow.”

Nichols also described how James continues to make BGSU Men’s Soccer proud as he advances his career at the professional level with the Rochester Rhinos. After being the first player in BGSU history to ever be invited to the MLS player combine, he was drafted by Sporting KC and will continue his astounding career with the Rhinos. 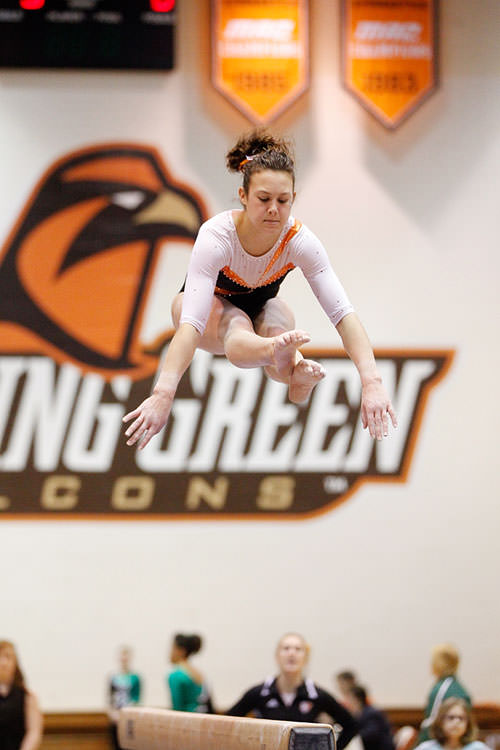 Alyssa Nocella has played a leading role during her Gymnastics career at BGSU.

In addition to being a First Team All-MAC selection for the 2014, 2015 and 2016 seasons, she was named the MAC Senior Gymnast of the Year in her final season. In her 2015 season alone, she registered seven first-place, nine second-place and three third-place finishes. One of her most notable accomplishments was her qualifying appearance at the NCAA Regionals four years in a row.

Representing one of the finest examples of Falcon scholastic excellence, Nocella has impressed not only athletically but also academically. She was named to the Academic All-MAC team for the past three seasons, one of only two gymnasts in the program history to have earned this honor so many consecutive times.

“Alyssa is incredibly deserving of this great honor. She truly represents the balance and excellence of both student and athlete. She has excelled in each area due to tremendous effort and dedication to her high standards and goals,” observed head coach Kerrie Turner. “Through all this effort, Alyssa has succeeded with a smile on her face and encouraging words for her teammates. She is the type of student-athlete all coaches treasure as a part of their programs.”

Best of the best

BGSU has a driven, talented student body that has given the University a strong reputation nationally and on the global stage. This legacy of excellence is well represented by our 411 student-athletes who are expected to lead by example and demonstrate the values and strong qualities of BGSU. The Falcon Medal of Honor will continue to recognize the best of the best —those extraordinary student-athletes who  embody the University’s ethic of commitment and accomplishment.