BGSU Rugby has been one of the most successful collegiate programs nationwide for the past 36 years. This perennial knack for winning is once again in the sporting news with the squad’s MAC Sevens Championship win in April. 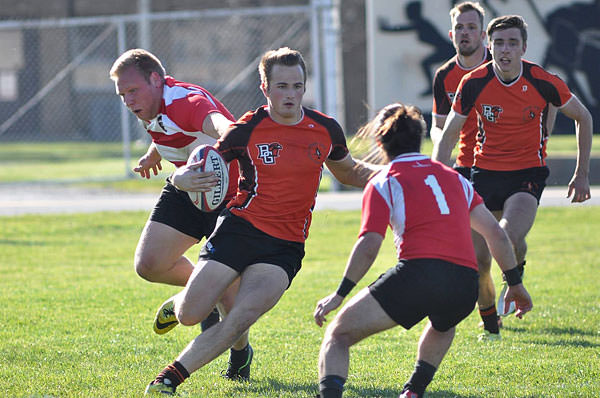 Center Adam Regini sets up for a ruck with Ryan Steinmetz in support against CincinnatiThe Falcons beat Dayton, Cincinnati and Miami en route to reaching the championship game, played at BGSU’s own College Park rugby pitch. Despite a loss to Louisville in the tournament’s pool play, as well as recovering from a loss to Notre Dame just before the tournament, the team came back and fought hard to bring home another MAC Championship victory.

Head Coach Tony Mazzarella was impressed with his team’s effort and unwavering focus throughout the day.

“Seeing as how the MAC tournament came just three days after our loss to Notre Dame, I have to admire our players’ mental toughness,” Mazzarella said. “They were all about completely blocking out the loss and concentrating on the next item on the checklist.”

The MAC Championship has secured the Falcons a bid to the National Sevens Championship in Cary, N.C., over Memorial Day weekend. It has also earned them continued recognition as a true powerhouse in the conference as well as nationally.

Hopes are high as the team prepares for the national championship, and Mazzarella is excited for what his energetic squad can produce.

“When these guys are clicking, they are really exciting to watch,” Mazzarella said. “Putting the other team’s players on the ground, counter rucking and scrum control puts a lot of ball in their hands.”

For the latest news on Falcon Rugby at the College 7s National Championships, visit USA Rugby.