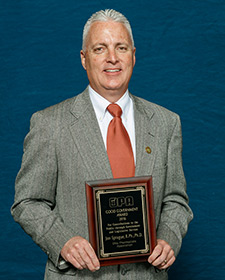 Description: Dr. Jon Sprague, director of the Ohio Attorney General’s Center for the Future of Forensic Science at BGSU, received the 2016 Good Government Award from the Ohio Pharmacists Association. The award honors pharmacists who have produced major contributions to the public through government and/or legislative service/education at the local, state or national level.

Dr. Jon Sprague, director of the Ohio Attorney General’s Center for the Future of Forensic Science at Bowling Green State University, received the award during the OPA 138th annual conference held April 15-17 in Columbus. The award honors pharmacists who have produced major contributions to the public through government and/or legislative service/education at the local, state or national level.

Sprague, who is also the Ohio Bureau of Criminal Investigation (BCI) Eminent Scholar, has had a critical role in reducing abuse of synthetic drugs by helping to write both state and federal laws on the topic. He began to assist the Ohio Attorney General’s Office in developing rules and laws in an attempt to stay ahead of the clandestine laboratories developing synthetic designer drugs (e.g., bath salts and spices).

These efforts have resulted in the enactment of Ohio Administrative Code 4729-11-02 assisting law enforcement based on drug pharmacophores, slight variations in the chemical structures of the drugs that produce the same desired effect. Subsequently, this rule is commonly referred to as the “Pharmacophore Rule.” The language he devised allows the law to flexibly cover various synthetic drugs that are created.

“Jon Sprague is one of many pharmacists who have the passion to provide superior health care to the patients of Ohio,” said Ernest Boyd, OPA executive director, “but he also takes time out of his busy schedule to stand up for what’s right.

“His work was immensely helpful in creating legislation that reduces the abuse of synthetic drugs. It is a service to our profession and the citizens of Ohio,” Boyd added.

OPA, established in 1879, represents more than 4,000 pharmacists, pharmacy educators and pharmacy students throughout the state. It is OPA’s mission to unite the profession of pharmacy and encourage interprofessional relations while promoting public health through education, discussion and legislation.