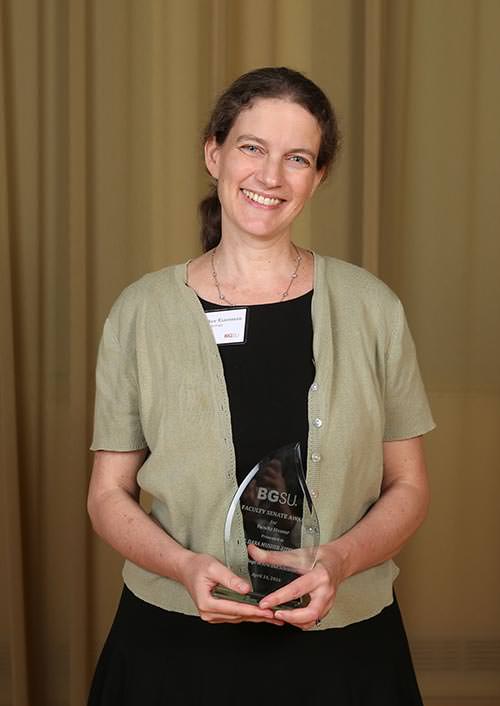 As a Bowling Green State University Department of Psychology faculty member, Dr. Dara Musher-Eizenman truly embodies what the Faculty Excellence Awards is all about. Not only does she mentor fellow faculty, but she also guides undergraduate, graduate and doctoral students whenever possible.

Musher-Eizenman received the Faculty Mentor Recognition at the Faculty Excellence Awards on April 14.

Presented by Faculty Senate, the Faculty Mentor award rewards outstanding professional support of colleagues in the development of teaching, research and service initiatives. Musher-Eizenman, who become a full professor of psychology in 2012, received $1,000 and a commemorative plaque.

She was nominated by Dr. Michael Zickar, a professor and chair of the psychology department, who cited her as being a sought-out resource in the department as well as playing a vital role in the professional development of Dr. Anne Gordon, who also wrote a support letter.

“I have known Dara for 15 years,” said Gordon, who has benefited from Musher-Eizenman’s observations as she positions herself to be promoted to full professor at BGSU. “Based on the many observations and many experiences I have had with Dara over this time, I can say with conviction that she is supremely deserving of this award.”

Gordon said that knowing she can turn to Musher-Eizenman for advice, whether professional or personal, has made an impact on her life.

“I can see the influence of Dr. Musher-Eizenman on her fellow faculty members,” Zickar said. “The type of mentoring that Dr. Musher-Eizenman provides is an important glue that truly holds a department together. I provide her my highest and most enthusiastic support for this award.”

Zickar said that in addition to Musher-Eizenman working with fellow faculty members on improving their teaching teaching and adapting curriculum, she also published three articles in peer-reviewed journals with with former faculty member Dr. Rob Carels and was the co-investigator on grants with Dr. Eric Dubow.

Musher-Eizenman has been the vice chair of the psychology department since 2004. Her research interests include the development of eating behaviors and children’s body- and food-related knowledge and attitudes as well as parental feeding practices.