Giving back to the CBA

Bowling Green State University holds special meaning for Mike ’80 and Mary Lee ’80 McGranaghan, and the Falcon Flames are doing their best to make sure BGSU remains exceptional for future students.

“Mary Lee and I are both 1980 graduates of the School of Business at Bowling Green, and that’s where we met. So, it’s a special place ... We both grew up in Ohio and went to school for four years at Bowling Green, and we both have fond memories of the school and of the program. That’s kind of the groundwork for our giving.”This year, the McGranaghans have committed $475,000 in gifts to the University: two separate University scholarships — an endowed scholarship they have built up over the years that provides scholarships each year to students in the College of Business Administration (CBA), and a scholarship for Honors students who are in the college — and a quarter-million-dollar contribution for a new building for the CBA.

“We also recently provided a gift to fund a project that focuses on the way classes are taught,” Mike said. “We helped fund a guest speaker in November as well as funding some other things around that — so several different funding initiatives.”

The McGranaghans are both Ohio natives — Mike is from Perrysburg and Mary Lee is from Solon — who met during their senior year at BGSU.

Recently retired, he started out as a senior financial analyst in the corporate finance group and soon was promoted through the ranks, ascending to leadership positions in consumer and pharmaceutical businesses. 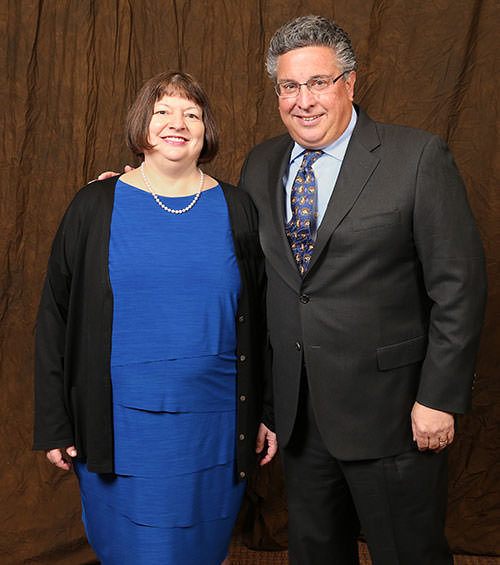 During his career, McGranaghan made major contributions to Johnson & Johnson. He was chief financial officer for several different ventures before being promoted to vice president for group finance for the medical devices and diagnostics segment in 1999. Other accomplishments include serving as the vice president for group finance for the medicines and nutritionals business from 2003-05 and being named Johnson and Johnson's first chief procurement officer.

​Beginning in​ 2009, as vice president for group finance of the company’s pharmaceuticals business, he ​played an important role in turning​ Johnson & Johnson into the one of the most innovative and fastest growing pharmaceutical businesses in the world.

“I had a wonderful career with Johnson & Johnson,” McGranaghan said. “I literally have dozens of lifelong friends from J&J and enormous respect for the company.”

Recently, he has shared his hard-won knowledge and expertise with the University as a member of the College of Business Administration Leadership Council.

Like the McGranaghans, Braun, who was named dean in 2012, is a 1980 graduate of the business college, but they didn’t know each other then.

“To make it even more of a small-world story, we both were accounting graduates,” McGranaghan said. “I’m sure we were in classes together but apparently we had different groups of friends and so we didn’t know each other at school.”

The McGranaghans are optimistic for the future of the CBA of Bowling Green.

“Our giving is really geared toward the College of Business, from where we are both graduates,” McGranaghan said. “A good piece of our optimism centers around Ray Braun’s leadership and what he stands for. A part of it is getting a world-class business building in place: That’s key. The other parts are attracting and retaining remarkably bright students with scholarships and having special faculty who are teaching with the best methods. That’s kind of our three-pronged approach to our gifts.”

In particular, the McGranaghans are very excited about the scholarship for the Honors program.

“At the end of the day, it’s about attracting and retaining really bright students we believe are determined to make a big difference in the world,” McGranaghan said. “We’re determined to help them, especially those who have need. Hopefully, someday they ​will return the favor to Bowling Green, but more importantly ​make significant contributions to society.​"