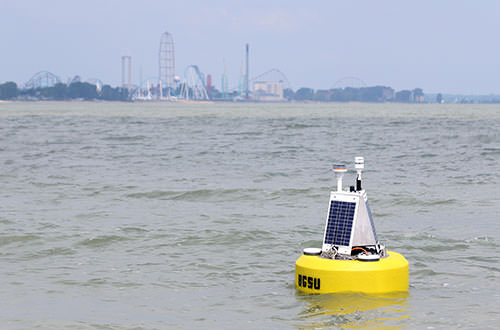 Just 16 days later, the sensors started to pay dividends for the $250,000 BGSU research project, according to “Harmful Algal Bloom Research Initiative,” a recently issued report by the Ohio Department of Higher Education on the results on learning how to deal with Lake Erie's harmful algal bloom problem.

The goal of the project, “Harmful Algal Bloom Detection, Mapping and Warning Network: Sandusky Bay,” which is part of a $4 million Lake Erie water quality initiative, is to protect the Sandusky city water supply.

And that’s exactly what it did on July 17.

“I don’t want to make it seem like we averted another Toledo situation (from 2014). We did not do that,” said Dr. George Bullerjahn, professor of biological sciences, who helped lead the project. “What it basically did was it showed the efficacy of having a sensor in Sandusky Bay reporting on chlorophyll and other pigments. On July 17, a big pulse of chlorophyll, this bloom material, got near the water intake and presumably entered the plant.”

“Right now, we’re measuring pigments and how turbid the water is and what the pH is, and things that you can equate to a high-bloom situation, but it doesn’t tell you whether the bloom is toxic ... (Eventually), we will be able to tell if it’s toxic and how poisonous the bloom event is.”Because of the sensors, he said, the plant was able to appropriately adjust its treatment protocols in response.

“It did not mean that the city’s water supply was at risk; it meant they needed to adjust their water treatment procedures in real-time to an event that was happening, which was cool,” Bullerjahn said. “It blew me away that it worked that well.”

Sandusky Bay algae contain the same toxin as Lake Erie, although it’s produced by a different organism, Planktothrix, according to Bullerjahn. Planktothrix thrive in near-shore environments around Sandusky from May until November. Microcystis blooms, which were responsible for the Toledo water crisis, occur in the open waters of Lake Erie.

Bullerjahn said the worst thing that could have happened last summer in Sandusky Bay was the water treatment plant would have released water that might have smelled a little funny, and that’s it. The green algal bloom wasn’t toxic or any kind of threat.

“As a proof of concept, if you put these sensors in the bay they can tell you what’s happening in real time and they can make adjustments on the fly,” he said. “The technology works, and real-time monitoring of water supplies with these buoys is effective and can help in decisions regarding water treatment and protocols.”

There currently are 17 buoys equipped with sensors that form a lake-wide network, and all report to the same website every 20 minutes.

“It’s just an amazingly effective network of data gathering,” Bullerjahn said. “If there’s a surprise, it’s that this all was installed and operational in a matter of months.”

BGSU’s buoys are located near where the city of Sandusky’s water treatment plant draws water from Sandusky Bay and Lake Erie. The plant can choose which area to draw from depending on the sensors’ readings. Typically, Bullerjahn said, Sandusky draws lake water, but there may be instances when the inclusion of bay water is the better choice.

In the future, Bullerjahn hopes to get even more sophisticated sensors.

“Right now, we’re measuring pigments and how turbid the water is and what the pH is, and things that you can equate to a high-bloom situation, but it doesn’t tell you whether the bloom is toxic,” he said. “(Eventually), we will be able to tell if it’s toxic and how poisonous the bloom event is.”

The main cause of bloom events is agricultural runoff. Farmers are adopting the right practices now to relieve the problem, Bullerjahn said, “but there are a lot of nutrients still in the system.”

Conditions in the lake will get better, but it’s going to take some time. Bullerjahn preaches patience.

“The problem will be far better in about a decade,” he said. “I want people to be optimistic, but I don’t want people to think it’s going to be fixed next year. Everything is trending the right way in terms of fertilizer use, nutrient loads, that kind of stuff.

“The residence time of the lake is about a couple of years so it takes a while to flush everything out, but eventually it improves. So patience is needed.”