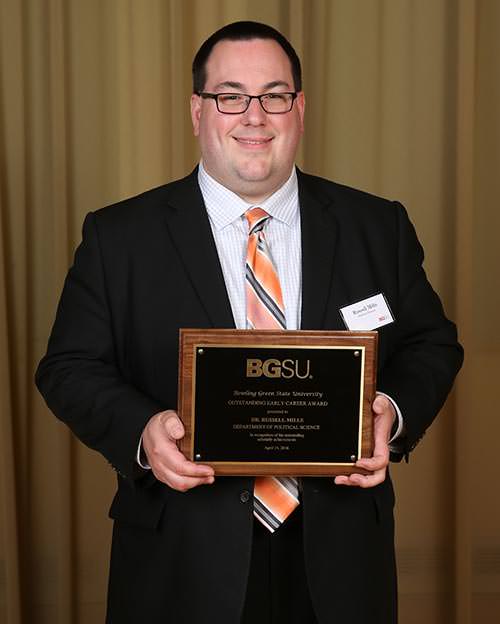 Perhaps it was telling that Dr. Russell Mills worked with the Federal Aviation Administration before coming to Bowling Green State University, because since his arrival in the fall of 2012, he has soared through research, teaching and service.

An assistant professor of political science, Mills was recognized for his achievements April 14 with the Early Career Award, presented by BGSU’s Office of Sponsored Programs and Research.

The award is designed to enhance the academic career of junior faculty by providing discretionary funds for the support of future scholarly activities. It brings a $1,000 credit to the recipient's discretionary research account, in addition to a $2,000 cash award.

Mills’ research focuses on regulatory politics, especially with respect to air transportation. Before joining the University, he was a policy analyst with the Federal Aviation Administration. More generally, his work deals with applications of public administration theory to empirical problems.

“He has an extraordinary record of publication for an untenured faculty member, with nine peer-reviewed articles, two book chapters, and four research reports,” Englehart said. “He has several other projects in the pipeline.”

Mills has been very successful in obtaining outside funding for his research, with one major external grant and three smaller ones. He also is currently managing the Center for Regional Development’s grants. One of his first projects with the center was a study of the economic impact of small, regional airports on their communities, funded by the Transportation Research Board of the Airport Cooperative Research Program. The study resulted in recommendations of strategies for retaining those regional airports.

“One especially admirable aspect of this activity is the way Russell has linked his research, service and teaching,” Englehart said. “He has extensively used service-learning and community engagement in his courses, as well as employing students in research funded by his grants.”

It was this commitment to service that drew him in part to become director of the Chapman Learning Community this year, which traditionally has been dedicated to community service and social justice. Mills plans to enhance that aspect of the residential learning community and already has arranged a spring break trip for student leaders to The Harvard Kennedy and Business School Social Enterprise Conference, referred to by Forbes magazine as “one of the top 12 most influential gatherings in the world.”

He also has been active in sharing his research with the public, through frequent media interviews with publications such as The Washington Post and Bloomberg News and appearances on television and radio.

His work has been recognized with other awards, including the American Public Administration Society Marshall Dimock Award in 2012 for the best lead article in Public Administration Review in 2011 for “Accountability in Governance Networks: Lessons From Hurricane Katrina.” He also received the University of Vermont Marshall E. Dimock Distinguished Alumni Award in 2014, given to an alumnus dedicated to the advancement of the field of public administration