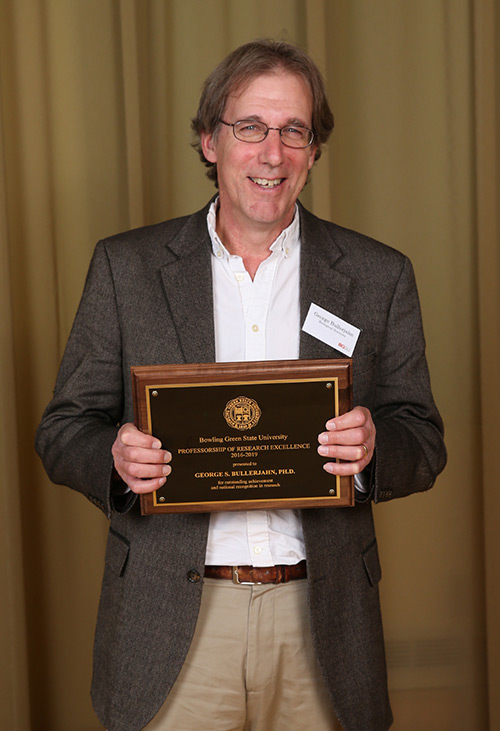 For making important contributions to the field of environmental microbiology that have helped position Bowling Green State University as a leader in this discipline in Great Lakes research, Dr. George Bullerjahn, department of biological sciences, was named a Professor of Research Excellence at the Faculty Excellence Awards Ceremony and Reception April 14.

Bullerjahn’s research accomplishments span decades, but his efforts have taken a spotlight following the August 2014 contamination of the city of Toledo’s water supply by toxins produced by cyanobacteria growing in Lake Erie’s western basin. As an expert in this discipline, Bullerjahn has led BGSU’s response to this crisis.

“With Lake Erie at the forefront of national debate over stewardship of our fresh water resources, George is energized and positioned to continue to lead BGSU research efforts that will help to address both the causes and control of these persistent harmful algal blooms,” Dr. Robert McKay, BGSU Ryan professor of biology, wrote in his nomination of Bullerjahn.

Dr. Sue Watson, research scientist, Canada Centre for Inland Waters, wrote in her letter of support for Bullerjahn, “George is a longstanding and valued partner with Environment Canada in US-Canada Great Lakes initiatives, and a member of the scientific team on our research vessels. George has brought his energy and considerable expertise to these project, aimed at developing the application of advanced molecular methods to evaluate microbial communities in the Great Lakes, particularly Lake Erie.”

“It is a great pleasure to collaborate with George, who has gained the respect and attention of the scientific community that he well deserves,” Watson added. “His students and post-doctoral fellows are well-trained, and demonstrate a keen interest and enthusiasm in their research, reflecting the exacting standards and lively curiosity that George applies to his science.”

Over his career, Bullerjahn has secured external funding in support of his research in excess of $3 million. This includes 14 separate awards from the highly competitive National Science Foundation signifying research excellence on the national stage.

“Professor Bullerjahn is a productive scholar, respected colleague and good citizen of the University,” wrote Dean Raymond Craig in his endorsement of Bullerjahn’s nomination.

Since 2010, Bullerjahn has published 17 articles in the peer-reviewed scientific literature; over his career, Bullerjahn has authored more than 85 scientific articles and book chapters. He serves as an associate editor at Frontiers in Aquatic Microbiology and on the editorial board of the Journal of Limnology.

“Without question, George is one of the nation’s leading researchers in the fields of cyanobacterial ecology, physiology and molecular biology as they pertain to harmful algal bloom dynamics,” Hans Paerl, professor of marine and environmental sciences at the University of North Carolina, wrote in a letter of support. “George’s success is in part due to his infectious enthusiasm and drive.”

“George is insightful, imaginative and intuitive when it comes to his chosen fields of cyanobacterial molecular biology and ecology,” Dr. Steven Wilhelm, professor and associate head of the department of microbiology at the University of Tennessee, wrote in a letter of support for Bullerjahn. “I have had the unique opportunity to follow his research on cyanobacterial molecular biology over the past several years, and the privilege of collaborating with him on specific questions concerning microbial ecology recently. Professor Bullerjahn stands now as a true scholar in both of these areas; I look forward with great eagerness to following the results of his continued success.”