Undergraduates honored for their diversity research 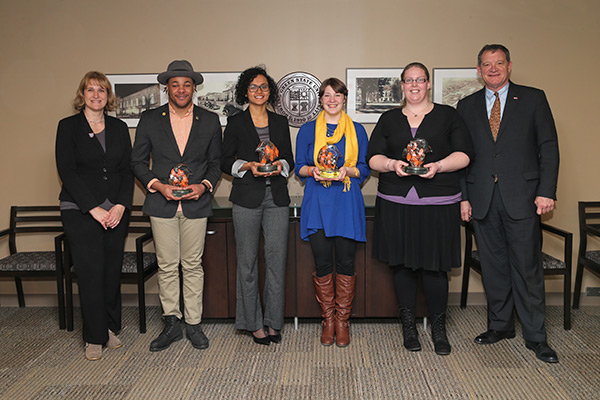 For the nearly 170 students who participated in the inaugural Undergraduate Symposium on Diversity: Opportunities and Challenges for the Inclusion of Diversity in Higher Education and Society, the experience turned out to be not only an academic exercise but also a personal journey of discovery.

On March 2, four winners — three individuals and one group — were presented awards for excellence at a ceremony including Dr. Rodney Rogers, provost and senior vice president, the students’ faculty mentors, and Dr. Cordula Mora, director of the Center for Undergraduate Research and Scholarship, which hosted the symposium at the initiative of the provost’s office. Winners received an original glass award created by art faculty member Joel O’Dorisio, each of which was unique in its representation of the Falcon head plumage, further symbolizing diversity.

“This is an incredibly important topic, especially today,” Rogers said. “We need to have a clearer and better understanding of how we work together as individuals and humans. The students who participated brought academic rigor to their discovery of these topics. The results were pretty overwhelming in their ideas, their creativity and their intellectual discipline.”

The next step, Rogers said, will be determining how BGSU applies the findings of the student researchers to inform University practice.

Mora noted that the judges had a difficult job choosing the winners from among the participants, all of who did a “phenomenal job.”

For Harris, a first-generation college student, the research into “Factors Influencing the Decisions of Black Males to Attend College” revealed to him how widely different peoples’ life circumstances and motivations can be. “Each person has a different story,” he found. He was inspired by his work to pursue the topic even further after the project was completed. His mentor was Dr. Ewart Skinner, telecommunications, who said he admired Harris’s “initiative in taking on this project that lends itself to more exploration and analysis as well as greater self-consciousness.”

Through Wonnell’s investigation into “Transgender Children: Who They Are and How We Can Help Them,” she said, she learned more about her own gender identity, which she said has already made her more empathetic in working with children. Her mentor, Dr. Mariana Mereoiu, intervention services, said, “Stephanie chose a piece that is very important but one that is not as much explored. The class and I as well all learned from her project.”

Skorupski’s project was “Communicating Change: Social Media and Civic Engagement,” in which she examined why some people are able to produce more effective anti-hate messages on social media than others. She looked at the influence of factors including knowledge about an issue and social media skills and motivation related to the severity and relevance of the discrimination on people’s ability to produce persuasive messaging. She was surprised to find that “knowledge became insignificant” compared to motivation factors.

Her mentor, Dr. Lisa Hanasono, media and communication, said it was a “privilege and a joy” to work with undergraduates on research. “I see so much growth so fast and their work leads to new projects with even more students.”

After the event, Skorupski praised her mentor, with whom she took an independent study, for making the complex steps in collecting, coding and analyzing data straightforward and easy to understand.

In accepting the group award for a project called “I Called My Mom and Told Her How Much I Hated College: Race Differences in BGSU Students’ Experiences of Diversity and Culture Shock,” Smith, a senior majoring in sociology, explained that while the students surveyed had all found a welcoming campus environment with many opportunities for friendship, social and academic engagement, there were big differences in their perceptions of the community’s diversity. For black students, who generally reported coming from much more racially and culturally diverse home towns, the campus culture was not an unpleasant shock, but the white respondents had greater difficulty adjusting to the campus diversity.

The project was part of a sociology class taught by Dr. Laura Sanchez on introductory methodology. Sanchez noted that CURS offers undergraduates important opportunities to not only conduct research but to also gain experience presenting it.

The symposium took place Jan. 13, and featured 46 posters by about 170 students based on work in courses or with individual faculty mentors. View the abstracts of all the presentations.