Reaching for the stars at NASA

The future seemed to hold a career in sport management for Maria Arredondo ’09 when she arrived at Bowling Green State University, and she gained a considerable amount of experience that was focused on that field.

But somewhere along the road, she stepped away from that profession track, and ended up in space. Yes, outer space.

Arredondo was introduced to this otherworldly realm through an internship with NASA, and she made a safe and highly successful landing. Today, the Lorain native is an award-winning education program specialist at NASA’s Glenn Research Center in Cleveland.

Arredondo oversees the development of educational content based on the work that NASA’s scientists and engineers are doing at the installation, and she serves as the conduit to carry that knowledge to teachers and students throughout this part of the country. Her programs provide a rare opportunity “for learners of all ages to explore and develop their full learning potential.” Simply put, Arredondo’s work allows educators to bring NASA material right into the schools. 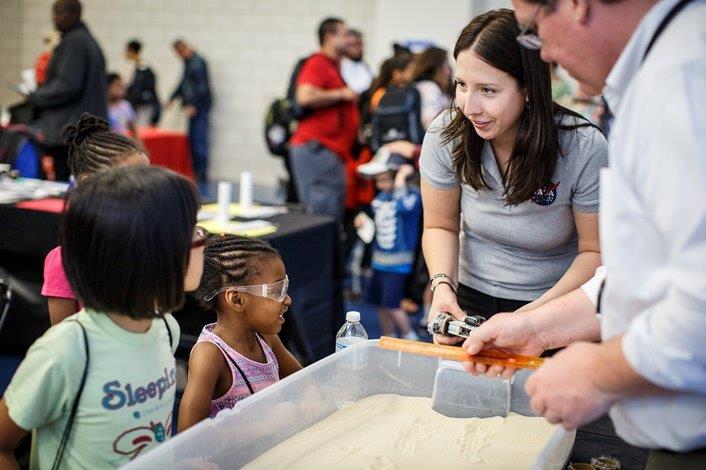 “We do have educational outreach programs, but I do it a little differently,” she said. “We have professional development training so teachers can take content on Engineering Design Challenges into their classrooms, or their after-school programs. That way, kids can actually learn about what we are doing here at NASA and the types of challenges our engineers and scientists face.”

“They get to come here, meet with the people from NASA working on these projects, and develop a much more detailed understanding of the kind of work we do,” she said.

Arredondo said she also facilitates the links that allow students from across this part of the country to connect virtually with those NASA scientists and engineers.

“The students can talk to the NASA staff, brainstorm with them, and even get career advice,” she said. “The purpose is to let students understand firsthand about real-world problems, and get that information from our engineers and scientists. It is a really unique opportunity, and one we think is extremely valuable.”

Arredondo said one major project that students were able to be involved with concerns the rover that is currently on the surface of Mars. The rover continues to function beyond the original expectations for its period of service, so NASA is working on possible ways to lengthen the life and performance of the tires and wheels that move the vehicle.

“And students have had the opportunity to help us figure out what to do,” she said.

Arredondo hopes this educational connection will open the gateway to career opportunities in the sciences for more students, especially young women. As a high school student herself, living relatively close to the Glenn Research Center, she was not even aware the NASA facility existed until a teacher stopped her in the hall one day and suggested she apply for an internship at the center.

“That’s how I found out about NASA. I remember it was a very long, involved application and by filling that out I was able to learn more about NASA,” she said.

Arredondo continued to intern at the facility during her undergraduate days at BGSU, and developed a deep appreciation for the value of studies in the science, technology, engineering and math (STEM) fields. She also did co-op work at the research center while attending graduate school in Cleveland.

“Through my experience, I was very motivated to try and get kids interested, not only in the STEM fields, but also in NASA and the many interesting things going on there,” she said.

Arredondo was recently honored for her efforts to promote student involvement in the STEM fields. She received the “Technology Rising Star Award” at the 2015 annual National Women of Color Technology Awards Conference in Detroit.

“Personally, this was the first major individual award for my career, so it means a lot. It is nice to know it was based on the work I have been doing,” she said. “Young women may not realize it now, but their passion, motivation and drive to work in science, technology, engineering or mathematics, the STEM fields, will make a difference for our economy and will also inspire other women that they can do anything they put their minds to.”

Arredondo had originally planned to work as an athletic director or in a project planning position, but she said her 2009 degree in education from BGSU, with a sport management major, provided a broad base of training and knowledge that was easily applicable in her role with NASA.

“I’m definitely glad I chose the major I did, so I would not change that. There are so many things I learned that I can carry over into my career,” she said. “The skills you learn from one major can be carried with you wherever you go. It is unbelievable the parallel. Whether you are staging a sporting event or bringing students into programs at NASA, many of the same focuses are involved.”

Arredondo said she is proud of her role in bringing NASA’s educational programs to students throughout the region, and of the opportunity to work collaboratively with major school districts, the Great Lakes Science Center, and Massachusetts Institute of Technology and the United States Department of Education.

“I’m really glad things worked out the way they did for me,” she said. “My internships and experiences in college allowed me to see and explore other types of work. What I did at Bowling Green really helped me.”