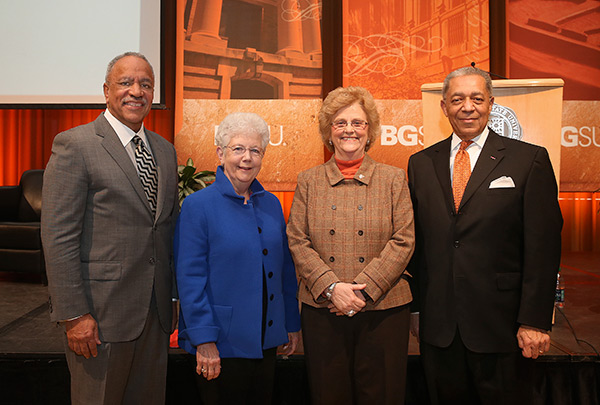 Three BGSU presidents, from different eras and with different leadership styles, shared their vision of higher education with the University community on March 21. Speaking to a full house in the Lenhart Grand Ballroom at the Bowen-Thompson Student Union, former presidents Dr. Sidney Ribeau (1995-2008) and Dr. Carol Cartwright (2008-11) joined President Mary Ellen Mazey to discuss their achievements during their time in office and what they see as the major issues confronting higher education today.

The Presidents’ Panel helped launch the 10th annual Teaching and Learning Fair hosted by the Center for Faculty Excellence, a three-day event focusing on student success. While the three presidents’ times at the helm were shaped by their respective economic and social contexts, Ribeau, Cartwright and Mazey all shared the overarching goal of promoting educational opportunity and achievement for the citizens of the state and a commitment to bettering society.

They each also stressed that none of their achievements was done alone but as part of teamwork and building upon what went before.

Ribeau said passionately that leadership is a continuum and, although different times call for different leadership, “higher ed needs to step back a minute and look at itself.” He said that current criticism of higher education as inefficient “is not well-founded. We should not be following the corporate model. We need to speak to the value of higher education to society, which is producing thoughtful, enlightened individuals. We don’t produce widgets.” He also noted that although the many aspects of the economy have “melted down” at various times, higher education has not.

Cartwright noted that the traditional two pillars of higher education funding — state support and tuition — are no longer sufficient to sustain it, and so now universities must become more innovative and entrepreneurial and look more to private support. She praised the public-private partnerships BGSU has engaged in for such enterprises as the aviation center and the health center.

Universities must also prepare students with a “life-ready, career-ready” education, providing opportunities and value, and must focus more on quality assurance, especially as more coursework moves online, she said.

Ribeau echoed her concerns, adding that diversity and inclusion and creating a true pipeline from the lower grades upward is critical, “or we will never reach the true potential of our U.S. democracy. We need to break that cycle of disadvantage — the parents didn’t and the grandparents didn’t. If we don’t there will be a price to be paid later in the process.”

Mazey sees what she called the “triple A’s” as the biggest issues facing higher education today: Affordability, reducing the costs for students; accessibility, making sure that diverse populations, from minority, to international, to older and nontraditional students, have the best educational opportunities, and accountability, ensuring the quality and value of programs.

She spoke of BGSU’s internship and co-op guarantee and a STEM initiative with the Toledo School for the Arts among the University’s efforts to help students succeed.

Calling BGSU “the most exciting, generative environment” and his time here “the most creative, innovative period of my academic life,” Ribeau counted the Building Community Initiative as one of what he considers his top three accomplishments. Bringing the entire University community together, hearing from classified and administrative staff, faculty, alumni and friends about what they thought of BGSU and where they thought it should aspire to go, was a process of defining the future and identity of the institution, he said. “It was a model for collaboration and it set the stage for the first comprehensive campaign for the University.”

Defying advice to aim for $75 million, Ribeau instead took the inspirational advice of then-Trustee Kermit Stroh and others and set $150 million as the goal, which was achieved with the help of donations large and small, from faculty and staff up to major donors, and created the resources for the Student Success Initiative, the new Bowen-Thompson Student Union and many other important initiatives.

Building on the Ribeau legacy, Cartwright commented that even though she was originally hired on a one-year basis as interim president, “It was clear I wasn’t going to be a caretaker. A year is a long time.” Wrapping up the comprehensive campaign, she said,  “we picked up the wonderful threads of the institution and continued weaving them.” Four months into her one-year term, she was invited to extend her stay to three years, “and by then my husband and I had fallen in love with BGSU.”

“Bowling Green has a more palpable sense of community pride than we had experienced at Kent State,” she said. “You can feel it. From move-in weekend to the way the community embraces the University.”

As one of the top accomplishments during her tenure, she named the next capital campaign, which allowed BGSU to build the physical living and learning environments that were needed as a result of the programmatic advancements during Ribeau’s years. This included the Wolfe Center, the Stroh Center and the creation of Centennial Falcon Properties that enabled the building of new two residence halls and new dining centers. Another accomplishment was the strategic plan that included the mandate from the state to identify centers of excellence — a process that revealed and documented to the state more excellence than it had expected, Cartwright said.

Mazey said she is most proud of BGSU successfully raising its academic profile and admitting its academically best-prepared classes several years in a row. This is especially important in light of the state’s new funding formula that is based on the number of graduates universities produce, she said.  Also, “We continue to transform our campus with state-of-the-art buildings and through partnerships with the BCI and the Wood County Hospital, for example.” To remain successful in today’s new environment, she said, BGSU must be innovative, flexible and adaptable and responsive to changing demands.

All agreed that teamwork and everyone bringing their best ideas to the table is the most productive avenue to moving the University forward. Cartwright noted that leadership is necessary not only “vertically, but also horizontally as well,” to help strengthen an institution. “You can lead from any level,” she said.