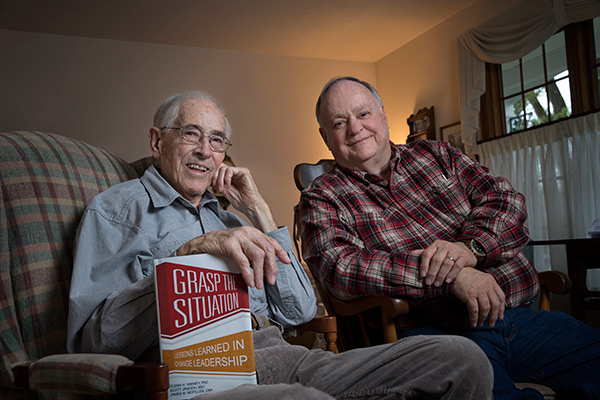 To correct a problem, any problem, something needs to change — but what? Most people would apply some sort of problem-solving method to fix something even as basic as a broken faucet. They would analyze what is not working and decide how to proceed. They might even watch an Internet video on how to diagnose what's wrong and how to fix it.

However, when the problem is within an organization, leaders tend not to take this analytical approach, but instead jump in with a solution without conducting careful observation and diagnosis and then choosing the best remedy, according to Drs. Glenn Varney and James McFillen, both Bowling Green State University professors emeritus of management in the College of Business Administration. They fail to accurately “grasp the situation,” and the results are often disastrous.

“Grasp the Situation: Lessons Learned in Change Leadership,” a new book by Varney and McFillen, along with co-author Scott Janoch, who’s spent 35 years as a human resources executive and a consultant to various industries, brings the authors’ collective wisdom from years of teaching and practice to the issue of organizational change. They use real-life scenarios to illustrate what works and what does not.

“It’s really a book of stories about failure,” McFillen said humorously. “Failure is a major learning opportunity. Earlier in history, before we had books and the Internet, people learned through stories. We tried things and sometimes they failed, and we asked ‘What did we learn?’”

Using a medical model, the authors developed the concept of organizational diagnosis as the key step toward effective change and have successfully used it to address many situations. To ensure an accurate diagnosis, the authors provide a rigorous process to correctly identify “symptoms” of problems plaguing an organization. They first presented their method in a 2013 article co-authored with BGSU faculty Drs. Deb O’Neil, a professor of management and director of the Master of Organization Development (MOD) Program, and William Balzer, a faculty member in industrial-organizational psychology and vice president for faculty relations and strategic initiatives. The article has been widely cited.

“It applies to almost everything,” said Varney, who has 18 years’ experience as a human resources vice president and consultant in addition to his academic experience. He cautioned that an important part is remembering that an organization is made up of people, and to be successful, the process must include understanding the organizational culture and considering how the proposed remedy will be met by employees. Only after surveying the culture — the equivalent of medical doctors understanding their patients' situations — can a diagnosis can be made and an intervention designed.

They provide the example of a university whose utility costs had become unacceptably high. A team of administrators devised a strict plan of lowered building temperatures in the winter and reduced air conditioning in summer, carefully calculating the energy saving this could generate. However, in response, costs went up. Why? Because people working in the buildings responded by bringing in portable heaters and fans so they would be more comfortable. Obviously, failed to anticipate the employees' reactions.

Other examples are much more deep, involving leadership that does not know how to motivate and does not have the training to address problem behaviors. “Grasp the Situation” provides guidance in designing training programs and in avoiding placing trust in the wrong people.

“Grasp the Situation” is not a typical academic book, nor is it a typical “how to” book on organizational change, McFillen noted. Designed to be very readable, it conveys its lessons through lively stories, gleaned from the authors’ experience. Those stories often include instances of failure.

“There’s a huge failure rate for organizational change among firms,” McFillen noted, because most business consultants are solution-oriented and not problem-oriented. But when the proper diagnosis of the ill plaguing the organization is made, and the organization's culture is accounted for in the prescribed intervention, the results have been very successful, Varney said.

Although following this scientific system of observation, collecting and synthesizing symptoms of the problem, making and testing a preliminary diagnosis, and designing an intervention takes time and patience on the front end, it saves much time and money in the long run, the authors say.

Founded by Varney 40 years ago this year, BGSU’s MOD program was the first of its kind in Ohio and possibly the nation. Following Varney’s tenure, McFillen directed the program for over 15 years. Varney credits BGSU with “boldly going forward with the unorthodox program, which was offered off-campus and there was nothing else like it at the time.” It has become widely recognized for excellence and its presentations popular at Academy of Management meetings.

Today, MOD students take a course on “Diagnosing Organizational Issues,” also a first of its kind, taught by O’Neil. The MOD program is unique in being shaped by the combination of hands-on, experiential learning and the scientific method. In their capstone course, students take on a client from a nonprofit organization using the same methodology to help the organizations be more successful.

The authors have donated copies of “Grasp the Situation” to BGSU President Mary Ellen Mazey; Dr. Rodney Rogers, provost and senior vice president, and to other University administrators as well as the Jerome Library.

Published by iUniverse, the book is available at the website and through most online booksellers, including Amazon or Barnes and Noble.