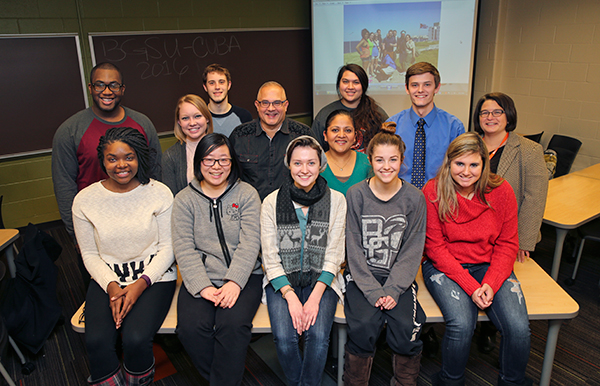 Preparing for their upcoming trip to Havana are Pedro Porbén (fourth from left), Carmen Alvarez (fifth from left), and Susana Peña (far right) with members of La Comunidad.
Tweet

This year, BGSU students will be able to even more fully immerse themselves in their studies, thanks to the generosity of Tom and Dianne Klein, who have created the Klein Development Fund for Residential Learning Communities. The fund supports new, innovative experiences for students that are purposeful, visionary and go beyond the traditional programming of their learning community.

This inaugural year, one group of students will head to Harvard University over spring break to attend a social entrepreneurship conference with the goal of reimagining their purpose and inspiring social entrepreneurship at BGSU, while a second group will visit Havana, Cuba, immediately after the end of classes in May for a rare look at a culture previously closed to most U.S. citizens and one that is experiencing huge social change.

Seven students from the Chapman Learning Community who will be Chapman leaders next year when they are sophomores, along with Director Russell Mills, political science, and Chapman graduate assistant Tania Mays, a master of public administration student, will travel to Cambridge, Mass., March 4-6 to take part in The Harvard Kennedy and Business School Social Enterprise Conference, referred to by Forbes magazine as “one of the top 12 most influential gatherings in the world.”

Attended by prominent leaders in social entrepreneurship as well as students and representatives from colleges and universities heavily involved in it, the annual conference provides an innovative mix of presentations, case study simulations and workshops.

“I think of it as a sort of ‘fact-finding mission,’” Mills said. “The students can see what some of the most innovative people in the world are doing and gather ideas for what we might do. We may make connections for internships or eventual jobs for our students. It also will introduce BGSU to leaders in the field to reinforce that we are an institution committed to service-learning and social entrepreneurship.”

Now in his first year as director of the Chapman Learning Community, Mills wants to restore and enhance the community’s focus on service-learning, with which it has always been intensively involved, to not only identifying social problems and working to ameliorate them but as career paths for students.

“I can see almost any major here at BGSU connecting with service in some way,” he said. “From a sport management major who seeks to provide programming opportunities for inner city youth to a nutrition major who addresses food insecurity, there’s an unlimited number of possibilities.”

Amelia Chapman, a freshman in the Chapman community from Whitmore Lake, Mich., majoring in communication disorders, said she has always been involved in service-learning since high school. “I’m really excited to meet people who have the same mindset as I do and finding new ways to get involved and get others involved. I’m looking forward to hearing from some of the ‘big names’ who come. I don’t know what to expect but to learn a lot and benefit on a personal level.”

Read Zoom News later in March for a report on the group’s experience and what’s next for the community.

The Cuba trip is also highly anticipated by those members of La Comunidad learning community who are participating. In preparation, they are meeting regularly with trip leaders Drs. Susana Peña, director of the School of Cultural and Critical Studies and an ethnic studies faculty member; Pedro Porbén, romance and classical studies (Spanish); and Carmen Alvarez, director of La Comunidad and a romance and classical studies faculty member, also in Spanish. Like the Chapman community, La Comunidad members are from a variety of majors, but they share a common interest in Spanish language and Hispanic culture.

Peña and Porbén are both Cuban, have been attending some of Alvarez’s weekly classes to familiarize students with the culture, food, history and traditions of Cuba. This will be their third time leading students on trips to Havana but the first with freshmen and sophomores.

In addition to the class visits, there have been film nights and two Cuban dinners. In this way, all the students, not only those who are going to Havana, are gaining insight into a new culture.

“It’s a learning experience for me, too,” Alvarez said. “I’ve never been to Cuba. But this will not be a ‘touristy’ trip. We’ll visit some museums but we’ll also visit with academics and social entrepreneurs.”

“We want to integrate the students into the Cuban community,” Peña said. “They’ll be staying with Cuban families and do a lot of walking tours to see buildings from before and after the revolution.” She pointed out that you don’t have to walk far beyond the perimeter of areas newly upgraded for foreign visitors to see how ordinary Cubans live and the challenges Cuban society faces.

“We’ll be investing a lot of time in community projects,” Porbén said. “Cuban society has been changing since 2012. We are finding community-based, grassroots projects for the students to participate in.” He has been calling upon family and friends in Havana to help organize the experience.

Sophomore Chloe Pearson, a visual communication and technology education major from Mason, Ohio, said she studied in BGSU’s program in Alcalá de Henares, Spain, last year and is eager to “expand my knowledge of other cultures even more. I love old traditions like those in Cuba and respect that and I’m looking forward to seeing it up close.”

The students will make reflective videos throughout and after their trip. Watch the BGSU home page this summer to share their experience.