Before coming to Bowling Green, Olscamp had served for seven years as president of Western Washington University.

A strong proponent of research, Olscamp supported the development of BGSU’s unique Center for Photochemical Sciences and the construction of the Physical Sciences Laboratory Building, in 1984, which also houses the planetarium. BGSU received funding from the Board of Regents to attract top scholars, develop pioneering research and develop centers of excellence. Regents funding also allowed BGSU to appoint three Ohio Eminent Scholars, in photochemistry, moral philosophy and industrial/organizational psychology. 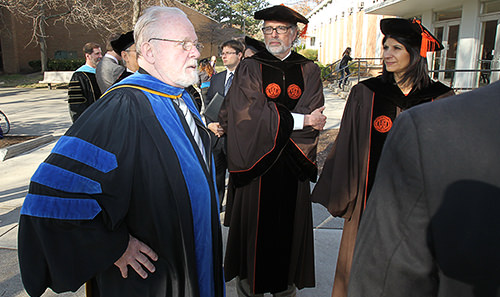 Olscamp is part of BGSU Centennial celebrations in 2010.During his tenure, a number of new buildings, including the Fine Arts Center, Perry Field House and East Hall, were built, as was Olscamp Hall, in 1994, the University’s first fully technology-equipped building featuring a teleconferencing system.

He spearheaded a program in Canadian Studies that included research and teaching, and the establishment of the Center for Canadian Studies, focused on trade relations and economic development in northwest Ohio. Under his leadership, the holdings of the University Libraries grew substantially, and computing, academic and research equipment became much more available across campus.

Olscamp also led an effort to attract bright students to campus, which resulted in a dramatic rise in the number of National Merit Scholar students enrolling.

He worked to improve the overall education a BGSU student received and to boost graduate and minority enrollment and international education. Known for his fundraising expertise, his efforts included a successful campaign to support the arts at Bowling Green. BGSU’s first endowed professorships, in management, finance, chemistry and philosophy, were created.

During his BGSU presidency, he was a member of the Board of Directors for the American Association of State Colleges and Universities and was appointed by President Reagan in 1987 to the National Council on the Humanities. Olscamp was named Mid American Conference representative to the National Collegiate Athletics Association’s Presidents’ Commission in 1989.

A philosopher by academic training, by the time he joined BGSU, Olscamp also had written extensively on higher education management and was the author of four books. While president, he continued to teach a philosophy course for many semesters.

He began his administrative career in 1969 as an associate dean of the College of Humanities at Ohio State University after serving on the philosophy faculty for seven years. He then was vice president for academic affairs and dean of faculties at Roosevelt University from 1970-72.

In 1972 he joined Syracuse University as a professor of philosophy and executive assistant to the chancellor and president. He was also a vice chancellor for student programs at Syracuse.

Born in Montreal, Quebec, Aug. 29, 1937, Olscamp earned bachelor’s and master’s degrees form the University of Western Ontario and a Ph.D. from the University of Rochester. He became a naturalized American citizen but is remembered for singing “O Canada” at hockey games.

Following his retirement from BGSU in 1995, he served as interim president of the University of South Dakota and then of Mayville State University in North Dakota.

He is survived by his wife, Ruth, and children, Rebecca and Adam.

A private gathering for family and friends will be held at a later date. In lieu of flowers, contributions may be made to: Coeur d'Alene Public Library Foundation, 702 E. Front Ave., Coeur d'Alene, ID 83814.

Condolences may be sent to sympathy@bgsu.edu and the University will share the messages with the Olscamp family.