Jim Sherraden of Hatch Show Prints to speak at BGSU

BOWLING GREEN, O.—Master printer Jim Sherraden will visit Bowling Green State University Sept. 29 to discuss his award-winning career and recent work with Hatch Show Print. As part of the event, BGSU School of Art faculty and students will unveil a typeface they have created for Hatch, one of America’s oldest letterpress poster and design shops. 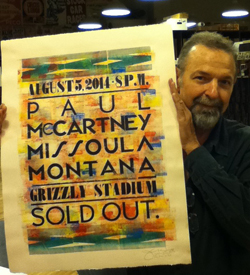 Sherraden is a prominent artist, printer and curator of the celebrated Hatch Show Print, located in Nashville, Tenn. Hatch Show Print has produced show posters for famous acts like Louis Armstrong, Loretta Lynn, Pearl Jam and Elvis Presley since its founding in 1879. Currently, Hatch designs and prints over 600 jobs a year, using the orig­i­nal wood type found on count­less posters adver­tis­ing car­ni­vals, cir­cuses and vaude­ville and min­strel shows. The shop is his­tor­i­cally best known for its coun­try music posters, and, since 1992, has oper­ated as a nonprofit divi­sion of the Country Music Hall of Fame® and Museum.

A much decorated and well-respected practitioner in the art world, Sherraden is the recip­i­ent of the 2013 Distinguished Artist Award for the state of Tennessee. He frequently is invited to speak at national and international institutions, and regularly conducts letterpress workshops.

Since 1984, Sherraden has overseen the transition of Hatch Show Print from a cultural survivor to a widely recognized graphic design icon and destination for letterpress enthusiasts. In collaboration with Paul Kingsbury and Elek Horvath, Sherraden chronicled the evolution of this unique institution in the co-authored book “Hatch Show Print: The History of a Great American Poster Shop” (2001), now in its sixth printing.

Sherraden also is the creator of one of-a-kind pieces of art called monoprints based on posters housed in the Hatch archive. His work is collected by individuals and institutions worldwide.

Spearheading the BGSU typeface development project was Lori Young, an associate professor and chair of the Graphic Design Division in the School of Art. In collaboration with Sherraden and Hatch Show Print, Young began the lengthy process of typography development in 2006. Her graphic design students participated in the development of the numerals and punctuation, and regularly offered critiques of the typeface that Young and Sherraden were developing. Young’s students also participated in the production of the alphabet at her Bowling Green studio, Les Cheneaux Design, a laborious process that involved carving the alphabet into wooden letter blocks.

“I was very excited about this collaborative project from the beginning, most especially because it offered my students excellent professional development opportunities,” she said.

The development of the typeface is the most recent endeavor in a long and productive professional relationship between Young and Sherraden. The pair met in 2006 when Young volunteered to organize a vast collection of metal type at Hatch. She recalled that early conversations with Sherraden centered on her research emphasis, the development of experimental typography, and the various work she created using a laser cutter.

These initial conversations led to the pair’s first collaboration: a type design by Young and printed poster by Sherraden for the 2006 Genetic Imprint, SGC Conference in Madison, Wis. The collaborative print became part of the show for the 2006 Genetically Enhanced Super Printmakers and part of the permanent collection in The Kohler Library at the University of Wisconsin-Madison. The poster also has been featured in the fifth edition of the distinguished “Meggs' History of Graphic Design.”