Back to school after 36 years

Al Watts finishes what he started

The phrase “back to school” had an entirely new meaning to Al Watts after a nearly four-decade hiatus. Watts was in the very first Master of Organization Development (MOD) cohort at BGSU in 1976 and completed all of the coursework required to receive his degree. However, life got in the way and he didn’t finish his thesis.

And now he is receiving his MOD degree from Bowling Green State University.

Despite not having his degree, Watts spent 36 years pioneering programs in the private sector and becoming a leader in the field of organization development, which was relatively new back in the 1970s.

He managed training and development, employee relations, and professional-level recruitment at well-known companies such as Land O’Lakes and Rosemount Engineering, part of Emerson Electric.

His success led him to start his own consulting agency. Watts now has more than 25 years of consulting experience helping organizations align people, systems and structures with strategic direction and core values.

He has worked with organizations throughout the private and public sectors in a variety of industries including health care, government, education and manufacturing.  His client list includes universities, hospitals, private medical practices, Fortune 500 companies, the U.S. Department of Transportation and the Social Security Administration. 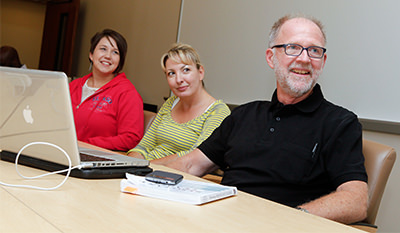 He is the author of the book “Navigating Integrity – Transforming Business as Usual into Business at Its Best,” a guide for positioning integrity as a practical business strategy. He is also designated as an “Expert Author” on EzineArticles.com, has been published in various trade magazines and is often invited to present to professional groups.

Despite his success, Watts felt as if something was left unfinished, and finishing what he starts is an important conviction for him. His friend David Jamieson, a professor at the University of St. Thomas and renowned in the field of organization development, provided the final motivation for Watts to finish what he started — the Master of Organization Development degree.

After reviewing his unique circumstances, O’Neil and Tom Daniels, assistant director for Graduate and Executive Programs in Business, responded with the requirements needed to finish the graduate program: Complete the standard admission process; write about his 36-year work history, documenting how he utilized the concepts and materials taught in the courses he completed during the 1970s; and attend two final classes, Engaging Whole Systems for Change and Mastering Change.

“I was delighted to welcome Al back to finish what he started decades ago,” O’Neil said.  “I believe that the learning for both Al and the students and faculty with whom he has interacted during the final two classes has been mutually rich and meaningful.”

The second hurdle was the fact that Watts lives in Minneapolis, and BGSU is not a convenient commute. Problem solved. The MOD program at BGSU is designed for working professionals with busy careers, families and personal commitments. Classes meet face-to-face three weekends each semester for roughly 20 in-class hours per weekend at the Levis Commons facility in Perrysburg, Ohio.

Watts flew in for classes on Friday afternoons and flew back to Minnesota on Sunday evenings. He does recall the one time he decided to drive to Bowling Green from Minneapolis.

“The weather should be pretty safe in April, right?” thought Watts. Well, maybe not during the winter of 2014 and definitely not in Minnesota. Watts hit a blizzard and followed it all the way to Wisconsin, where he took a vow to only fly from that point forward.

The third hurdle was becoming a student again after 36 years. Problem solved. Watts describes his learning journey in his monthly newsletter and how the path of the journey isn’t as important as the mindset throughout the journey.

The Executive Master of Organization Development program at BGSU is nationally known and was the first program of its kind in the nation. In fact, Watts originally entered the program in 1976 because it was one of only two programs in the country.

“Returning to grad school after many years in the profession has been a rewarding experience, offering more learning opportunities than reflected in BGSU’s course catalog"MOD students earn a degree in 18 months with a cohort of professionals. The program blends classroom and online instruction, allowing students the flexibility to continue working while enhancing their education.

The curriculum consists of 10 courses designed to educate students on increasing the effectiveness of individuals and organizations. There is also an international trip that focuses on understanding and applying organization development principles in contexts and cultures outside of the United States.

BGSU’s College of Business Administration has been included on The Princeton Review’s list of best business schools for the decade. In addition, the college has achieved the gold standard by being accredited in both business and accounting by the Association to Advance Collegiate Schools of Business International. Only 5 percent of business schools worldwide reach this pinnacle of success.

A successful student, a successful program and a successful outcome; however, this isn’t the end of the story for Watts. While he has already proven himself by becoming an expert in an unexplored field, he plans to take what he has learned in the program and continue building on his success.

“Returning to grad school after many years in the profession has been a rewarding experience, offering more learning opportunities than reflected in BGSU’s course catalog,” he reflected.