BOWLING GREEN, O.—In the short six and a half years since he began his work on nanomaterials, Dr. Mikhail Zamkov has compiled an impressive record of achievement that has propelled him to the forefront of his field. Bowling Green State University recognized his success and the potential his research holds by presenting him the Olscamp Research Award. 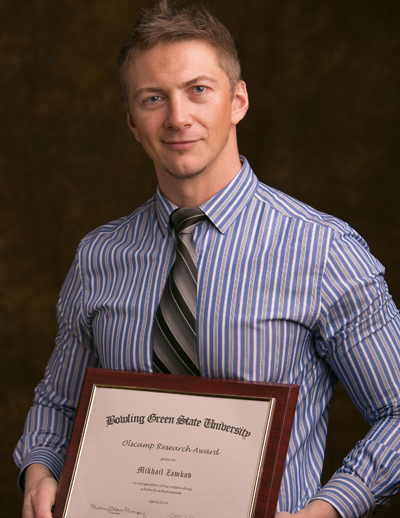 Given annually by the Office of Sponsored Programs and Research to a faculty member for outstanding scholarly or creative accomplishments during the previous three years, the award includes a $2,000 cash prize and a reserved parking spot for a year. It was given to Zamkov, an associate professor of physics and astronomy and associate of the Center for Photochemical Sciences, during the Faculty Excellence Awards on April 16.

“He has built a very strong and active research program that successfully competes with larger and better-established groups at top research universities,” wrote nominator Dr. John Laird, chair of the Department of Physics and Astronomy.

“His unique approach to inorganic nanoparticles shows great promise for the next generation of semiconductor devices, and the vital national importance of this research in photovoltaics (e.g., solar cells), photocatalysis (e.g., hydrogen production for fuel), and light-emitting nanocrystals (e.g., light-emitting diodes) guarantees sustained interest in the results,” Laird said, noting that Zamkov’s research has already led to two patents.

Zamkov has received strong approval from the scientific community, as evidenced by the number of refereed articles he has had published in top-tier, high-impact journals, a fact that did not escape the National Science Foundation (NSF) review panel for one of his grant proposals. In addition, he was invited to present at the National Chemical Society meeting in 2012 and to contribute a book chapter to a prestigious work.

Other experts in the field frequently call upon him to serve as a referee for journal articles and as a grant-proposal reviewer on panels for the NSF and the U.S. Department of Energy.

“Perhaps the most challenging measure of high-quality research, especially in recent years, is obtaining external funding, where Zamkov has found remarkable success,” Laird said. In the past three years, Zamkov has secured two major NSF grants, totaling more than $677,000, as the sole principal investigator, and concluded a National Institutes of Health grant for over $200,000, as a co-principal investigator.

Zamkov joined the faculty at BGSU in 2007 after having two postdoctoral positions, at the University of Illinois at Urbana-Champaign and Kansas State University, respectively. He received his Ph.D. in physical chemistry from Kansas State (the James R. Macdonald Laboratory) in 2003, and his bachelor’s degree in theoretical condensed matter physics from Krasnoyarsk State University in Russia in 1997.