Marilyn Shrude honored for a lifetime of achievement

BOWLING GREEN, O.—The Faculty Senate at Bowling Green State University has honored one of the University’s most accomplished and dedicated faculty members with the Lifetime Achievement Award. 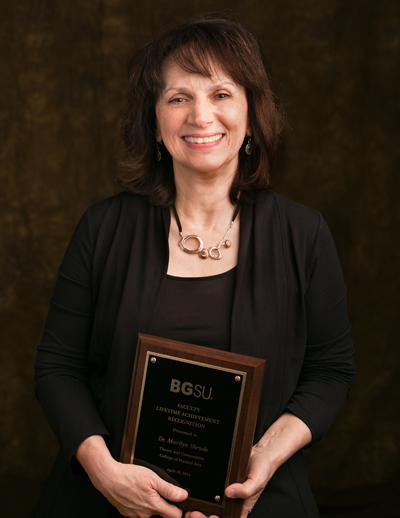 Distinguished Artist Professor Marilyn Shrude received the award, and with it $1,000, at the April 16 Faculty Excellence Awards. She has spent 37 years of her professional life at BGSU, during which both she and the College of Musical Arts have experienced enormous growth. An internationally known composer, Shrude is also an expert teacher, administrator, community liaison and advocate for contemporary music.

She played a critical role in establishing a doctoral program in contemporary music at BGSU in 2005, the first of its kind in the country, and is now the director of the program and its acting graduate coordinator. She was the chair of the Department of Musicology, Composition and Theory from 1998-2011; was a founder and director of BGSU’s MidAmerican Center for Contemporary Music; a co-founder and former director of the New Music Festival, and led five study-abroad programs for BGSU students in Italy.

“These experiences represented life-changing events for many of our music students,” wrote nominator Dr. Mary Natvig, assistant dean of the college and a professor of musicology, composition and theory.

As a composer and musician, Shrude has received numerous awards and broken new ground in her field.

“Dr. Shrude's music is known for its lyrical, highly linear and multilayered sounds that result in a bright, shimmering and delicately wrought sound world,” Natvig wrote. “Marilyn has been awarded prestigious honors by the American Academy of Arts and Letters, the Rockefeller Foundation, Chamber Music America/ASCAP, the National Endowment for the Arts and the Guggenheim Foundation. She was also the first woman to receive the Kennedy Center Friedheim Awards for Orchestral Music and the Cleveland Arts Prize for Music.”

Her compositions have been performed across the United States, in Europe and in Asia, and she has been a guest artist at festivals around the world. Nearly 20 of her compositions have been recorded on various labels. She has been commissioned to compose pieces by various orchestras, most recently the Brave New Works Ensemble and the Walla Walla Chamber Music Festival.

Shrude holds a bachelor’s degree from Alverno College and a master’s degree and doctorate from Northwestern University. She began teaching at BGSU in 1977.