FINDLAY, O. – The generosity of Findlay native William Frack continues to grow. The value of his gift to the Findlay-Hancock County Community Foundation, benefiting the Bowling Green State University men’s basketball program and community needs in Hancock County, has nearly doubled to about $20 million since it was initially announced in 2011. 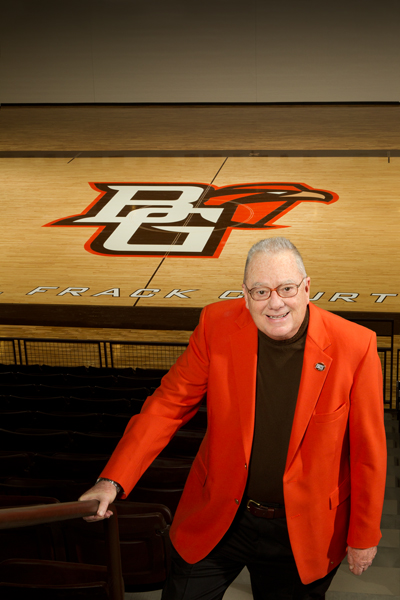 Frack, representatives of the Community Foundation, and BGSU announced the increased endowment at a news conference in Findlay April 9.

According to Community Foundation President Katherine Kreuchauf, three-quarters of the annual distributions from the series of existing trusts goes to the BGSU’s men’s basketball program. The remaining proceeds will support community needs in Hancock County.

“The people of northwest Ohio will benefit from Mr. Frack’s generosity for generations to come,” Kreuchauf said. “He will leave behind an amazing legacy of caring and support for our community.”

Frack has followed BGSU basketball for more than six decades. His father first brought him to watch the Falcons play in 1948 in the old Men’s Gym, and he has remained a devoted fan.

“Many of my fondest memories revolve around BGSU basketball,” Frack said. “I want to give back to the program that has meant so much to me and to the community I’ve called home.”

The gift is one of the largest ever to the Community Foundation. The endowment will be the single, largest private gift in BGSU’s history. It is also the largest one-time gift ever designated to a Mid-American Conference basketball program.

It is estimated that the endowment will generate about $675,000 annually for the men’s basketball program in perpetuity.

“BGSU is truly blessed to have a friend like Bill Frack,” said BGSU President Mary Ellen Mazey. “Bill’s generosity will allow us to give our coaches and student-athletes the resources they need to excel and compete at the highest levels.”

Frack said that is exactly what he had in mind. “If Butler and Gonzaga can do it, Bowling Green can do it,” he said. “I want to provide the resources to take Falcon basketball to the next level.”

“I can’t emphasize enough what Bill’s passion and generosity means for our program,” said Chris Kingston, BGSU director of athletics. “This endowment literally is a game changer. It is the last piece of the puzzle for us to begin a new era of men's basketball in the Stroh Center.”

Hancock County programs that support the needs of the homeless and victims of domestic violence will also benefit from the gift. A portion of the proceeds will become a field of interest fund at the Community Foundation. After the fund grows to a permanently sustainable level, local organizations will be invited to submit proposals. Foundation officials project this will be within five years of the fund being established.

“The field of interest fund will provide support to organizations in our community that are helping our neighbors who need it the most,” said Pat Brown, Community Foundation board chair. “Through his generous gift, the homeless and victims of domestic violence will receive support to create lasting change.”

This is not the first time Frack’s generosity has touched BGSU. In 2008, he provided one of the leadership gifts to help start the Stroh Center, the University’s arena and convocation center that opened in 2011.

Last month, Frack made a contribution of about $700,000 to BGSU that allowed the University to offer a more competitive compensation package to attract new men’s basketball Head Coach Chris Jans.

The mission of the Findlay-Hancock County Community Foundation is to improve the quality of life in Hancock County through collaborative leadership, responsible grantmaking, and the development of philanthropic giving. Established in 1992 as an outgrowth of a one-time gift from L. Dale Dorney, the Community Foundation has granted more than $27 million to fund projects that support our community.  Visit www.community-foundation.com or call 419-425-1100 to learn more.