‘Frankenstein’ is reborn as puppet theater at BGSU

BOWLING GREEN, O.—He’s not Boris Karloff, and he’s definitely not a Muppet. When the Creature makes his entrance during the BGSU Theatre production of “Frankenstein,” director Bradford Clark predicts audiences will feel real shock, despite the fact that what they are seeing is a puppet.

Part of the “magic’ of puppetry around the world is its ability to capture audiences and cause them to suspend their disbelief, forgetting for the moment that the characters are not human, Clark said. 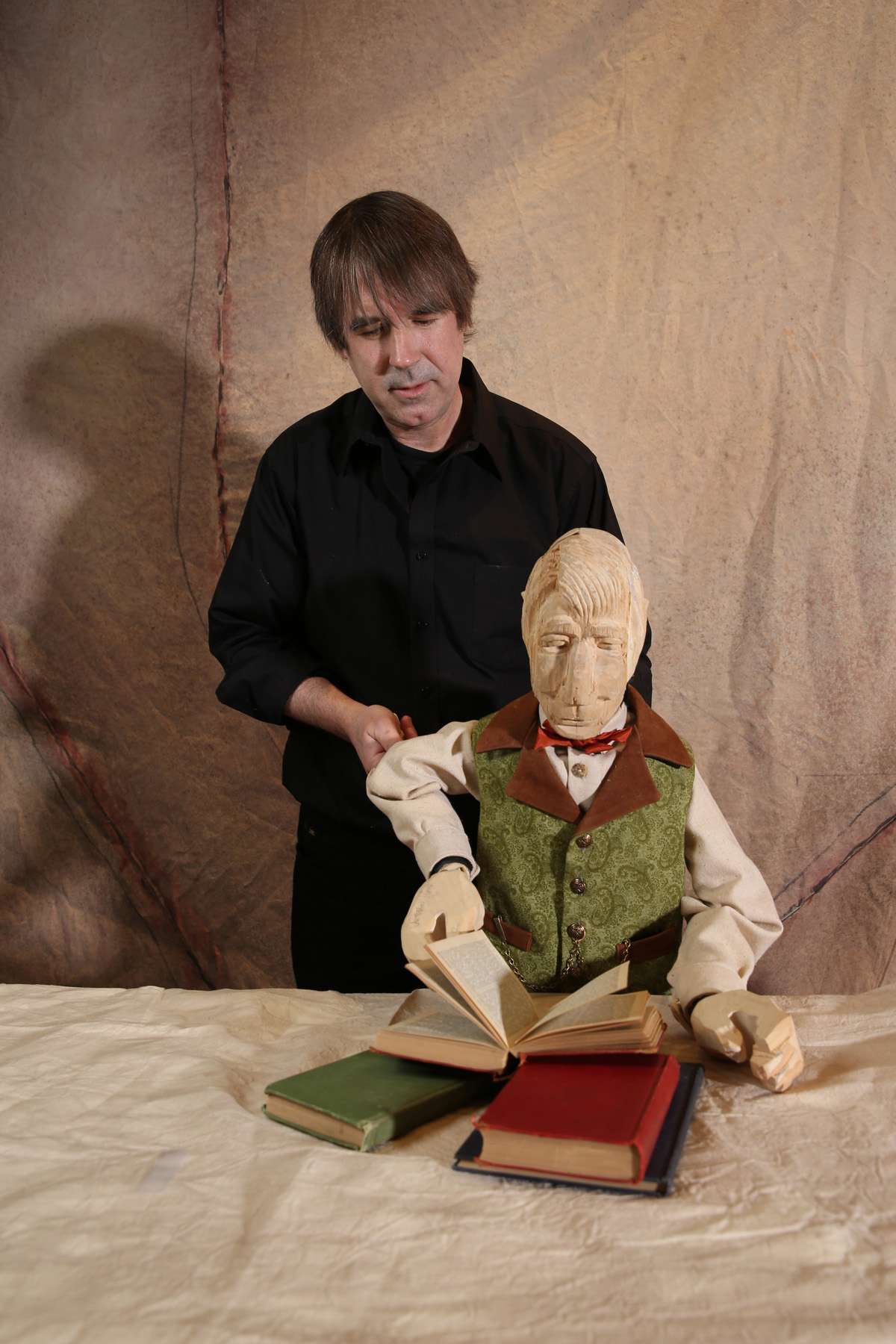 Clark, a professor of theatre, puppet performer and scholar, has spent the fall and winter months in a cross between a Geppetto’s workshop and Leonardo da Vinci’s studio, surrounded by woodworking tools and diagrams of human body parts. Clark has been carving and sanding the heads and hands of all the play’s characters, using techniques he learned from Japanese puppetry and Balinese mask making. Recently he was “cracking the heads open to insert the mechanisms that allow them to move their mouths and eyes,” he said. Last, rather than painting them, he will stain and finish the body parts like those of Czech puppets.

The show will be performed in the style of Japanese puppet theater, the characters’ soft sculpture bodies, mounted on long control sticks, run by two students each under black drapes. Clark has been coaching the student puppeteers on the carefully choreographed movements. In some scenes, the Creature will be portrayed by smaller hand puppets — entailing the creation of duplicates on a smaller scale, elaborate costumes and all. That is a job for costumer Laurel Daman and her students, many of whom also are in the show as puppeteers.

“The fact that the puppet is a truly unreal and unliving creature lends itself well to the Frankenstein story,” Clark said.  “The idea of creating an artificial man is a natural for puppet theater.  We’ll have dialogue, but the story will be communicated visually as much as possible. We can’t compete with the special effects of the movies, but we present a very disturbing idea that is much closer to the Mary Shelley original novel than the Boris Karloff version.”

Theater students at BGSU have the unusual opportunity to study and work with puppets, learning about international styles and traditions, about puppets in performance, and puppetry construction. Although there are puppetry classes in some other theater programs, “they tend to be exclusively associated with youth theater,” Clark said — and, clearly, “Frankenstein” is not for children. In fact, parents are strongly cautioned against bringing children under 12 to the show. In the intimacy of the Eva Marie Saint Theatre, the effect can be unnerving, he said.

“There’s stylized violence, but it is violent, and there are wild sounds and darkness and blood,” he said. The show will also have plenty of atmospheric spookiness, from the flickering light of the “magic lantern” displaying Victor Frankenstein’s graphic medical texts to shadowy forms and crashing lightning.

Clark has been planning the show for over a year, “paring down the characters from Shelley’s book.”

“The beauty of ‘Frankenstein’ is that it really resonates as a modern myth,” Clark said. “You can look at it from so many different aspects. That’s the thing about great works — they are redefined for every generation.”

Unlike the interpretation of later years in which “Frankenstein” represents “technology run amok,” Clark said, “the book is more of a timeless tale in which the Creature is actually intelligent and articulate but the rejection of his ‘father’ turns him bitter and violent.”

“Frankenstein” has provided the opportunity for Clark to capitalize on his fascination with the “Body Worlds” exhibits of preserved human bodies and the detailed wax figures of humans found in the La Specola, the centuries-old natural history museum in Florence, Italy.

The costume shop, under the direction of Daman, has been busy building the costumes for the puppets. Each character has handmade, custom-designed clothing — another unusual feature of BGSU’s program. Typically, puppet theater programs aren’t able to provide this level of costuming, Clark noted. The bride of Frankenstein, for example, is in a full, if eerily tattered, wedding dress and veil.

“This was probably my favorite show, and my favorite costume,” said Sarah Coon, a graduate student in theater from Copley, Ohio. The bride’s outfit grew from just a veil to a petticoat and eventually an entire dress — to which the sewers then took power tools to rip and shred. “There we were in our goggles and gloves destroying the dress. How often do you get to do that?” asked Coon.

In the show, she manipulates the large version of Victor Frankenstein, and sewed his jacket.

“I’d never sewn before I came here, except for a couple of pillows and half an apron,” she said, “but now I’ve learned so much and come so far.”

Students tend to take ownership of the puppet characters they portray, even down to the costumes, said Daman. A veteran seamstress, she has created costumes for even bigger puppets, such as the animatronic Abraham Lincoln in the Lincolnland Theme Park in Illinois. Many of her students, both men and women, have shown such a flair for sewing and costuming under her tutelage that they’ve gone on to jobs in Hollywood, or have learned a skill to support themselves with while pursuing acting or other stage work.

Some, like Carrissa Burns, a senior from Fremont majoring in technical theater, have been sewing for years, “ever since my foot could reach the pedal,” she said. Burns, who in high school made her own prom and graduation dresses, already has a job this summer as a costumer in the Croswell (Mich.) Opera House, and plans to work professionally in a costume shop when she graduates.

Interpreting Clark’s vision for the costumes, Daman and the students have created a series of outfits reminiscent of Swiss villagers’, with nubby textures in wool and tweed, embroidered muslin and calico, carefully chosen buttons and intricate pleats and pockets – even a made-to-size pocket watch and chain for Victor Frankenstein. The translucent peignoir of Victor’s wife, Elizabeth, is just translucent enough to catch the light and shimmer without being transparent — an effect Daman achieved through the careful choice and layers of fabric.

One of the challenges of creating costumes for puppets is adjusting them so they can “accommodate rods and hands coming through,” Daman said.

Also, “the proportions are weird,” said Burns “People are much wider than puppets.”

Jia Xin Tan, an apparel-merchandising senior from Malaysia, said the puppets’ limited mobility means some things won’t work. She and the others regret the beautiful fur collar she had made for the cape of Elizabeth, Victor Frankenstein’s wife, that turned out to be too thick for her to be able to give him a kiss.

Tan, who like Burns has been sewing most of her life, said she enjoys working in the costume shop. “I never get tired of sewing.” She plans to move to Shanghai after she graduates to experience living in a big city.

Daman and the students become quite attached to their papier mâché and basswood characters, affectionately patting “William,” the little boy with the checked knee britches and striped stockings.

The plus side of sewing for puppets includes faster work because of the smaller size, “They don’t care if they’re uncomfortable,” according to Burns, and “You always have access to your actor if you need to try something on them,” Coon said. On the other hand, Coon added, “You never get that moment of seeing your actor in their costume and having them say this is great.”

Since the play is set in the intimate Eva Marie Saint Theatre, audiences will be able to see clearly all the fine details of their work.