BOWLING GREEN, O.—The famously funny “Die Fledermaus” flits onto the Thomas B. and Kathleen M. Donnell Theatre stage Feb. 21 and 23. Presented by the Bowling Green State University Opera Theater in conjunction with the Department of Theatre and Film, the operetta light-heartedly unmasks the follies and foibles of its upper-class characters. 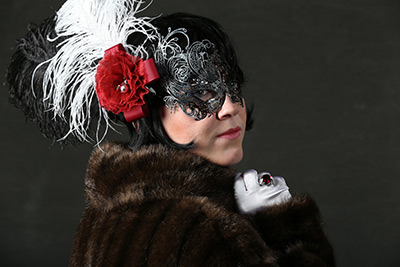 Composed by Johann Strauss, “Die Fledermaus,” German for “the bat,” premiered at the Theater an der Wien in Vienna in 1874, and has become a beloved part of the regular repertoire of opera houses around the world ever since.

“Everyone wants to laugh at the upper crust and their marital antics, and the foolish pranks people play on each other,” guest director Eric Gibson explained.

The tale of “Die Fledermaus” begins in the home of Gabriel von Eisenstein, a wealthy man of independent means. Eisenstein, his attractive wife, Rosalinda, and the rest of the cast lead the audience on an amusing journey from bedroom to ballroom to prison.

Set in a fashionable watering place in the late 1800s, the story unfolds with songs, masks and laughter. “‘Die Fledermaus’s music is timeless and beautiful,” Gibson noted. “It is a masterpiece that deserves the solid place in the operatic repertoire it has attained.”