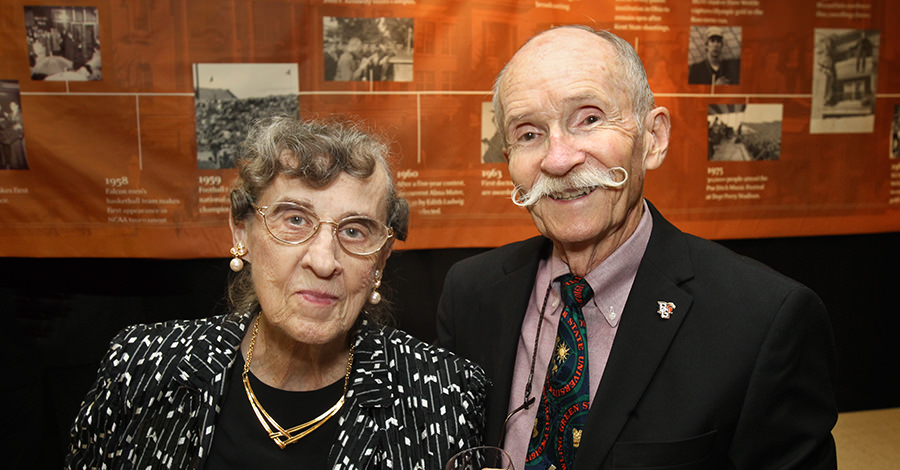 Joan and Jim Gordon at BGSU's Centennial Celebration in 2010. 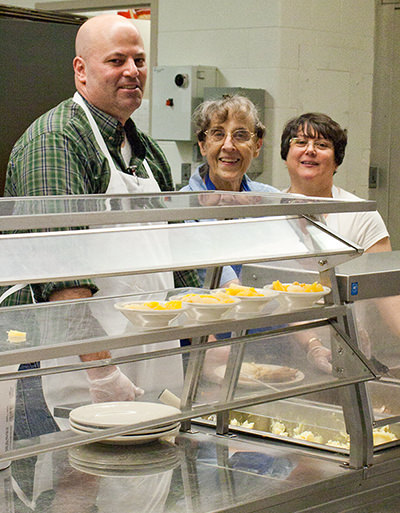 Joan Gordon was an icon in Bowling Green for decades. Involved in almost-too-many-to-count civic organizations, she was known for her attention to detail; her commitment to the city, its businesses, organizations and people; and for her ability to get things done.

Her trademark brown bangs and bun hairstyle were often seen in the local paper’s pages whether it was for a Kiwanis Club fundraiser, BG Women’s Club activities or Wood County Committee on Aging updates. When she passed away in September 2013, she left a huge void in the Bowling Green area community.

Now, Joan’s legacy of caring and involvement is being remembered and recognized through a recent gift by her husband, Jim, who also is a BGSU alumnus and a professor emeritus in journalism. He made a gift in memory of his Falcon Flame and wife of 56 years to endow the Joan Honkala Gordon Gerontology Scholarship.

“The scholarship is a testament to her loyalty and belief in services for senior citizens,” he said. She was a member of the Wood County Committee on Aging (WCCOA) for 31 years and had been instrumental in the agency’s relocation to the old city post office and the 2006 construction of a new kitchen to prepare meals for seniors at home in several area communities.

“Joan Gordon made tremendous contributions to the field of gerontology,” said Dr. Nancy Orel, director of the BGSU gerontology program.

“Joan tirelessly offered her transformative leadership skills to the Wood County Committee on Aging,” Orel said. “When I was asked to be the organization’s president in 2009, it was Joan’s visionary example that I followed, and I will forever treasure her kindness, support and incredible wealth of knowledge.”

Joan also was an avid supporter of the students enrolled in the gerontology program, Orel added. “She assisted many students who completed their internships at the Wood County Committee on Aging.

“Joan’s generosity and philanthropic leadership continues through the scholarship that was created,” Orel continued. “Through her gift, recipients will obtain their degree in gerontology and go on to provide needed programs and services for the older adult population.”

The scholarship will be awarded to a student with a minimum 3.25 undergraduate GPA and who is enrolled in the Master of Science in Interdisciplinary Gerontology at BGSU. Financial need may be considered in the selection process.

Joan’s connections were vast, from her work with the American Association of University Women and the local, state and national Women’s Club to her participation in numerous committees for the Chamber of Commerce and the city. Most likely her dedication to a community would have been to some other city if she and Jim had not attended BGSU. 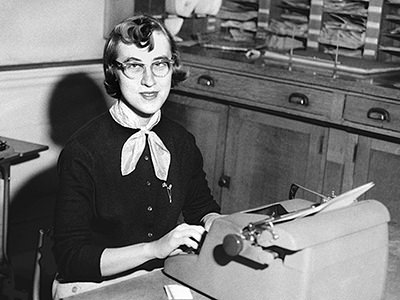 Joan’s connection started when she came to BGSU to study music. When she discovered she didn’t enjoy music composition, she decided to use her high school newspaper experience and changed her major to journalism, her husband recalled. At BGSU, she worked for the BG News for several years, serving as managing editor her senior year. She was named the Outstanding Journalism Graduate of 1957.

She and Jim met as undergraduates in the journalism program and, according to Jim, they “clicked” when they went to an Ohio College Newspaper Association conference in 1955. In 1956, he proposed to her in front of the Alpha Phi house, sitting in a new Chevy he got for graduation in 1956, and presenting her a ring that he bought with money from selling a Rolleiflex camera.

Her devotion to excellence continued throughout her life as evidenced by her resume that included page after page of involvements, activities and honors. The list of her honors and awards was as lengthy as the memberships because when she joined an organization, she believed in it and worked tirelessly to make it better. Her efforts were always appreciated and recognized.

During the 2014 Martin Luther King Jr. Tribute, the Bowling Green Human Relations Commission posthumously presented Joan the Drum Major for Peace Award. She was recognized as an exemplar of community compassion and acceptance.

But in her words, “My proudest achievements in BG included founding Leadership BG in 1992 (during her 16-year tenure as the Bowling Green Chamber of Commerce executive director), and then the BG Community Foundation; starting the Community Tree Lighting Ceremony, revitalizing the BG Holiday Parade in 1989 and growing the Chamber membership from 305 to 500.”

She also was honored to have chaired both the 150th and 175th anniversary celebrations for the city. And among her most prized treasures was her family, including Jim, son Kevin and daughter Melissa, both BGSU alumni, and her three grandsons.

“She raised the kids well,” said Jim. “She was so good at juggling everything – cooking, volunteering, kids and all of her accomplishments.”