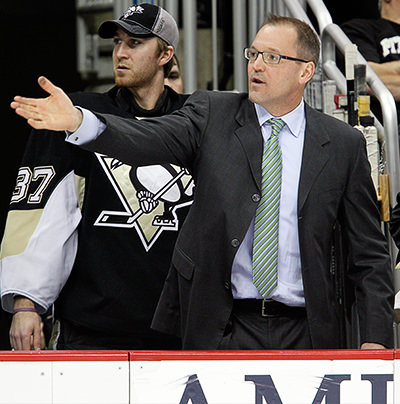 Dan Bylsma ’92 has established himself as one of the most prominent coaches in the NHL, and is making his first appearance as head coach of the U.S. Olympic men’s ice hockey team at this year’s winter games in Sochi, Russia..

Dan Bylsma ’92 is making his first appearance as head coach of the U.S. Olympic men’s ice hockey team at the 2014 Winter Olympics in Sochi, Russia. The honor comes as no surprise given his record of success in the National Hockey League. Since taking over the reins of the Pittsburgh Penguins midway through the 2008-09 season, Bylsma has become one of the elite head coaches in professional hockey.

His knowledge of the game comes from a distinguished career, first as a player and then as a coach. Bylsma played at BGSU from 1988-92, playing in 157 games with 87 total points to his credit.

He was selected by the Winnipeg Jets in the sixth round of the 1989 NHL Entry Draft, but did not begin his professional career until after graduating from BGSU. Bylsma skated for the Los Angeles Kings (1995-2000) and the Anaheim Ducks (2000-04) during his nine-year NHL career, posting 19 goals and 43 assists in 429 games.

He joined the Penguins organization in 2006 as an assistant coach for the American Hockey League’s Wilkes-Barre/Scranton Penguins before being promoted to the head coach position for the 2008-09 season. That same year, Bylsma was promoted to head coach of the Pittsburgh Penguins.

What followed was one of the most remarkable starts to a head-coaching career in NHL history. Bylsma finished his first season by bringing the Stanley Cup back to Pittsburgh. In each of his first three full seasons behind the Penguins bench, Bylsma’s teams produced 100-point seasons, highlighted by the 2010-11 campaign when he received the Jack Adams Award as the NHL’s Most Outstanding Coach.

Bylsma boasts a regular-season record of 201-93-25, marking the best regular-season winning percentage in Penguins history and the second-best win total among Pittsburgh bench bosses of all time. In addition, he became the fastest NHL coach ever to post 200 victories when he reached the plateau in just 316 games last April 23.