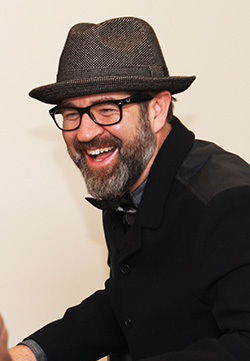 Alan Heathcock left Bowling Green State University in 1996 with his Master of Fine Arts degree in creative writing. He returned to speak at the Winter Wheat Festival of Writing in November and to read from his collection of short stories, “Volt.”

The book, which took him about 10 years to write, was named a “best book” of 2011 by national newspapers and magazines, was acclaimed by the New York Times and earned him many awards, including the recent Whiting Award in Writing, which also made him a good deal richer — the honor comes with a $50,000 prize.

The Creative Writing Program has nurtured an extraordinarily successful group of alumni, Heathcock said, among them authors Anthony Doerr, Seth Fried and Joanna Howard. BGSU is the alma mater of “numerous authors and editors of note,” he said. “It’s always very well represented at the Association of Writers and Writing Programs conference. They’re very active, integral parts of the writing world and the public sphere.”

For him, the awards, the travel and the reactions of readers have been “a little bit surreal,” he said by phone from his home in Boise, Idaho, where he teaches fiction writing at Boise State University. “The life of a writer is you sit by yourself. There’s not a lot of room in my intellect for thinking about what people are going to think about what I write or say about the book. I’m using all my intellect just to try to inhabit the characters.”

Those characters, who are often trying to make sense of the world after family tragedies and grieving losses, have turned out to resonate with readers in a very personal way. Heathcock recounts meeting a woman who had driven an hour and a half to meet him, having gone through a loss similar to one he wrote about. “The story allowed her to look at all this stuff that had been roiling about her. I’m very proud of that intimate connection with people and have come to think of it as a privileged experience and one of the highest purposes of my writing. I think now one of the highest purposes of art is to allow us to see ourselves in a way that’s bearable.”

To really get to that in his writing, he said, “I realized I couldn’t be self-conscious about it. I had to go all the way in, which is a terrible and painful experience but a cathartic experience. The praise I’ve gotten is just kind of gravy.”

With his hipster style, it is obvious Heathcock did not grow up in North Dakota. “Yeah, everybody here knows I’m in from Chicago,” he said humorously. He grew up in a working-class neighborhood on the South Side “so you didn’t go to school to be an artist.” Although he earned a journalism degree and even worked awhile in marketing, the pull of creative writing was always there, he said, and eventually led him to BGSU.

Now, thanks to Doerr’s persuading him to come teach at Boise State, the “city boy,” like Doerr, has a wife from North Dakota plus three children and has grown to love the “culture, the landscape and the lifestyle” of the West. He also enjoys the relative sense of safety he now feels. “Only when I went away from Chicago did I realize I was always afraid,” he recalls.

It is the “tenuous nature of peace in a world where grotesque violence happens” that still informs his writing. “It’s all over, it doesn’t have a demographic,” Heathcock said. “I’m interested in how people work their way back from that darkness and heal themselves.”

The intensity of his work and his writing practice mirrors the intensity of his time in the Creative Writing Program. “I struck gold in coming to Bowling Green. I was so lucky to be among a group of people who were really talented and really invested in becoming better writers. It was an inspired environment and the kind I needed. A big thing that I don’t take for granted is being here at that time.”

He remains a close friend of Doerr, who has also gone on to national success as an author. “We held each other accountable and kept working and pushing. I still feel we compete in the best possible way—if he gets an award, I feel my team has won. He inspires me to dig in and get it done.”

Part of the alchemy of his BGSU time was the number of outstanding faculty who inspired and challenged him, Heathcock said. “Richard Messer was here then, and Howard McCord and George Looney. Wendell Mayo was a great teacher. I still quote things he told me.”

Heathcock wants to impress upon today’s aspiring writers the importance of the “community quality” here but also their own role in daily creating that sense. “It’s hard to recognize when you’re in it, but it’s good to be reminded of your role as an individual and encourage each other to do great things.”

Now that his success has placed greater demands on his time but also allowed him more freedom, he will take a break from teaching to work on new projects including writing for film and magazines. Though a bit daunted by having free time after so many years of disciplined work, “I’m excited by the prospect of just writing,” he said.