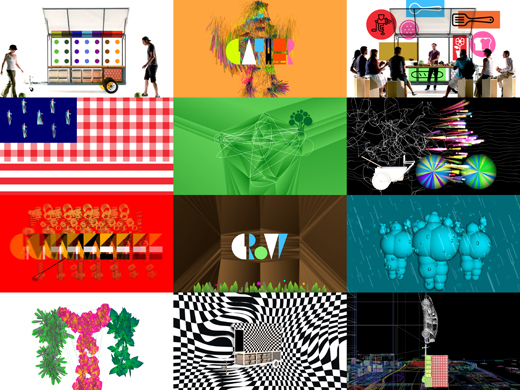 BOWLING GREEN, O.—Bowling Green State University welcomes back internationally recognized alumnus Rick Valicenti, founder and design director of Thirst—a Chicago design firm devoted to art with function. Since the late 1980s, Valicenti has been a force in the design world as an educator, mentor and artist.

He returns to BGSU in conjunction with his exhibit “Curiosities: Rick Valicenti + the 21st Century Thirst,” opening Oct. 9 in the Willard Wankelman Gallery at the Fine Arts Center. “Curiosities” features both commercial designs created for clients and personal art from the past two decades. More than 150 pieces cover the gallery walls and display tables to showcase the energy and connection to human emotion inherent in Thirst's designs.

Some of the works exhibited include designs with architects/designers Adrian Smith, Jeanne Gang, Arik Levy, Martin Felsen, and for clients such as Richard Wright, The Museum of Contemporary Art and Herman Miller.

Valicenti will provide a preview of highlights from the exhibit in a 5 p.m. presentation Monday, Oct. 8, in the Thomas B. and Kathleen M. Donnell Theatre at the Wolfe Center for the Arts, as a part of the BGSU School of Art’s ARTalks series.

A reception in the Wankelman Gallery will follow his presentation. Both are free and open to the public.

While at BGSU, he will also give an all-day student workshop called “Prepare for the Unexpected,” on Oct. 9.

Valicenti earned a bachelor of fine arts degree from BGSU in 1973 and is known as a visionary graphic designer.

Over the past 30 years, he has publicly presented his work through lectures, workshops and critiques on the design industry to more than 100 professional and college audiences on five continents, including multiple visits to his alma mater.

Valicenti is a former president of the Society of Typographic Arts and a fellow of the AIGA/Chicago. He has edited a monograph on the work of Thirst called “Emotion as Promotion,” published in 2005 by Monacelli Press.

The work of Thirst continues to advance the public design discourse, while pushing the boundaries of graphic and intermedia design. In 2006, Thirst was included in Cooper-Hewitt's "National Design Triennial: Design Life Now."

In 2011 Valicenti was honored by the White House with the Smithsonian Cooper-Hewitt National Design Award for Communication Design. In 2006, he received the AIGA Medal, the highest honor in the graphic design industry, for his sustained contribution to the profession.

His talk is presented in collaboration with AIGA Toledo, the AIGA student chapter, the BGSU College of Business Administration, the BGSU School of Art and the Graphic Design division of the School of Art.