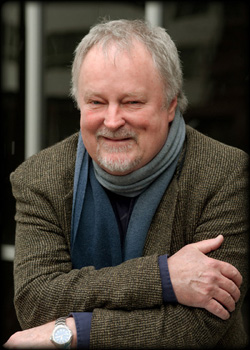 BOWLING GREEN, O.–Music students and fans of conductor, composer, musician and radio personality William (Bill) McGlaughlin will get to spend time with him when he visits Bowling Green State University Nov. 5-12. McGlaughlin’s radio program “Exploring Music” is heard daily at 11 a.m. on Toledo’s WGTE-FM, and across the country.

McGlaughlin is this year’s guest artist for the Dorothy E. and DuWayne H. Hansen Series in BGSU’s College of Musical Arts. The public is invited to an evening with him on Nov. 7. The free program begins at 7 p.m. in Kobacker Hall of the Moore Musical Arts Center, where he will share his thoughts and approaches to music and the business of music.

He will also conduct the BGSU Wind Symphony in an 8 p.m. concert on Nov. 9, also in in Kobacker Hall. Tickets can be ordered online by visiting http://www.bgsu.edu/arts or by calling 419-372-8171.

McGlaughlin is most widely known for his work in broadcasting, as host of Peabody Award-winning “St. Paul Sunday” and “Exploring Music,” as well as programs from Wolf Trap and the Library of Congress. He says he is proud to have begun his professional life as an “honest musician,” playing trombone with the Philadelphia Orchestra and Pittsburgh Symphony. In addition, he spent 25 years as an orchestral conductor with posts ranging from the St. Paul Chamber Orchestra to 12 seasons as music director of the Kansas City Symphony. Over that period, McGlaughlin received numerous awards for adventurous contemporary programming from the American Society of Composers, Authors and Publishers.

During his visit to BGSU, he will work with composition, brass, conducting and string students and conduct the Bowling Green Philharmonia in a rehearsal.

The Hansen Musical Arts Series Fund was established in 1996 to bring significant representatives of the musical arts to share their talents with BGSU students and members of the Bowling Green community. Past Hansen Series guests have included Marin Alsop, Branford Marsalis, Terence Blanchard, Craig Schulman and Bob McGrath from “Sesame Street,” among others.