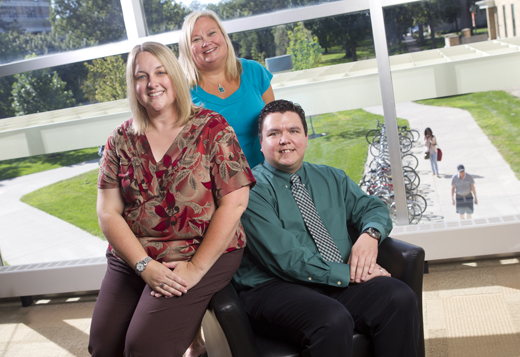 Teaming on BGSU’s suicide-prevention project are (left to right) Faith Yingling, Terry Rentner and Garrett Gilmer.BOWLING GREEN, O.—It’s a familiar scenario: a faculty member notices that a previously engaged student is missing class and now looks unkempt. Concerned, the faculty member would like to approach the student but doesn’t know where to begin. Or students become alarmed when a friend begins drinking more than usual and seems pessimistic and negative. Not wanting to insult the friend, or afraid of making things worse, they say nothing. Or perhaps it’s the first-year student who just seems lost and without a group with whom to bond. These can all be indications of someone who is having difficulty adjusting to life on campus, who is struggling with a mental health concern or who has experienced a traumatic life event. Some of these individuals may also be having thoughts of suicide.

Bowling Green State University wants to make everyone an effective part of the effort to prevent that from happening. A new grant from the Department of Health and Human Services Substance Abuse and Mental Health Services Administration will fund “Empowering a Community: Creating a Culture of Care for Suicide Prevention.”

The project is led by three people with extensive experience in key aspects. Dr. Garrett Gilmer, director of the Counseling Center, is principal investigator. Co-investigators are Dr. Terry Rentner, director of the School of Media and Communication, and Dr. Faith Yingling, director of BGSU’s Wellness Connection. In addition, coordinating tasks and managing events is Taylor Newlove, a graduate student in public health.

The four-year, $306,000 grant will enable BGSU to not only raise awareness about suicide but give the University community some real tools for recognizing warning signs and empowering them to intervene.

“A student cannot succeed if we’re not paying attention to the total wellness of the student,” said Rentner, who is also involved in grant-funded programs aimed at preventing alcohol and prescription drug abuse, both of which can be major risk factors for suicide. Altogether, the three grants total more than $800,000 and will help the University take a comprehensive approach to mental health and significantly expand current efforts.

To make it more encompassing, the University is partnering with the Wood County Suicide Prevention Coalition, the Falcon Parent and Family Association and the Bowling Green Police Dept., and enlisting the participation of on-campus groups for special events and activities.

By raising awareness among the community through marketing campaigns and event programming plus providing “gatekeeper” training for faculty and staff and eventually students, the hope is to create a culture of caring that makes it less likely for a distressed person to go unnoticed.

“We want to throw a wide enough net to help anyone who’s hurting — with depression, isolation, hopelessness. They’re all risk factors. We want to be able to reach out and turn things around for them,” Gilmer said. “But there’s no way the University could have enough counselors to talk to every person who is depressed, and not everyone even wants to talk to a counselor. Sometimes they just want to talk to an understanding peer or teacher.

“Our goal is to give people the confidence and the tools to talk with troubled individuals. On the other hand, not everyone wants to function as a counselor, so we will give them the information they need to make that initial contact and then refer the person to a counselor.”

He noted that the majority of people who succeed in committing suicide have never reached out for help. One of the project’s goals is to reduce the stigma attached to seeking help for suicidal impulses. Another is to make students aware of campus resources and the National Suicide Prevention Lifeline.

Awareness campaigning will begin this spring, followed by recruitment of faculty and staff for “train the trainer” sessions. BGSU will use the “Question, Persuade and Refer” system, “a ‘best practices’ method,” Gilmer said. By training enough people who can then teach others, the necessary skills and knowledge can be perpetuated long after the grant funding is over and become part of the campus culture.

The Falcon Parent and Family Association will sponsor a video contest aimed at three groups: veterans and LGBT people (both considered especially high risk), and the general population. Student filmmaker teams will compete for scholarships and prizes. Each team will have an adviser to guide them in safe messaging and appropriateness of content. By learning what they will need to know to make the videos, the students will become further educated about suicide and better equipped to carry on the goals of the project.