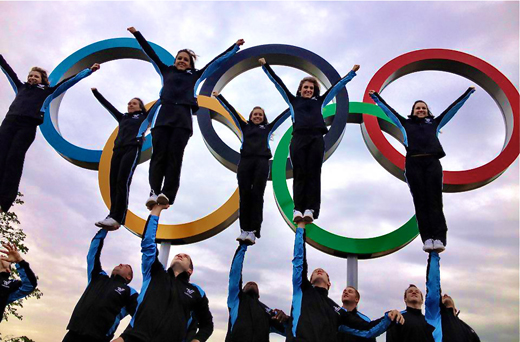 David Clemons, pictured in the center between the yellow and green rings, performs a stunt with the UCA cheerleaders.

BOWLING GREEN, O.—Look closely during the Olympic basketball semifinals and finals later this week when the “Dream Team” is on the court, and you may recognize David Clemons, assistant cheer coach at Bowling Green State University, performing during the games. Clemons is in London as part of the U.S.A. basketball cheer team.

Made up of 10 males and 10 females, the team, sponsored by Varsity and the Universal Cheerleaders Association (UCA), was chosen from the nation’s top college cheerleaders and UCA instructors. In addition to its choreographed cheers, stunts and tumbling, the team will entertain audiences with half-time performances during each game.

The UCA cheerleaders will continue to train for their routines this week in London leading up to the games.

Clemons was a cheerleader during both his undergraduate and master’s degree programs, at Central Michigan University and Morehead State College, respectively. He has worked at BGSU since 2009, with Anne Marie King, BGSU head cheer coach and director of spirit programs.

Traveling internationally is not unusual for Clemons; he and King travel with UCA as international cheer instructors and judges for Varsity-sponsored cheerleading camps and competitions. But being on the floor again himself is a switch.

“David will represent our country, UCA and Bowling Green State University well during his training and performance at the Olympics,” said King. “We are all excited for the opportunity he has received and we will all be cheering him on from BGSU during the games.”

This is not the first time BGSU’s cheerleading program has received national recognition. The cheer program has ranked top five in the nation among other top Division 1-A teams for three consecutive years at college cheer nationals, and is receiving a partial-paid bid for nationals at the ESPN World Wide of Sport in Orlando, Fla. The team also ranks third in Division 1-A Stunt, an emerging NCAA sport derived from the athletic components of cheer.