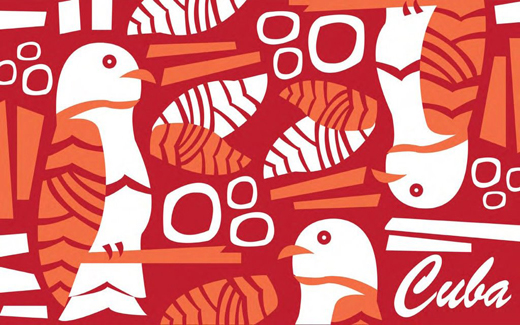 BOWLING GREEN, O.—At sunset this Saturday (May 12), graphic designs by three Bowling Green State University students will be projected on the side of two large buildings on Plaza Vieja in Havana, Cuba. The presentation is part of the Havana Biennial, an international art show.

Work by students Lindsay Holtz, Anthony Asher and Aubrey Cox was selected by a review panel for inclusion. Their designs are featured on the Facebook timeline for the biennial https://www.facebook.com/pages/Plan-C/107328372703703

Thanks to professional connections of graphic design faculty member Todd Childers, an associate professor in the School of Art, students in Three-Dimensional Graphic Design classes taught by him and instructors Amy Fidler and Andrea (Mo) Budinger this semester were able to participate in the show. Students created designs representing the spirit of Cuba, and had to research what the stereotypes are, and which might be true.

After doing their own research, each student prepared a series of six images for a sequential slide show, which would be projected into space using a point-of-view camera (camera obscura) that shows multiple images at once, creating the illusion of three-dimensionality and, in some cases, movement.

Childers and Fidler curated the entries, choosing several to submit to the Cuban review panel, from which the three were chosen.

“I was really pleased with the learning outcomes,” Childers said. “This was the first time the students had to think about something on an architectural scale, having to design to fill a very big space. They have done many smaller things, from posters to book designs, but this called for a different approach. It also led to some impressive installation pieces that have been displayed around campus.”

“One of the major benefits of being part of the process was sending our designs into the unknown and hearing their feedback,” Fidler said. “Although the language was a challenge, we learned that there is a language of design — of typography and image — and we all speak the same language.”

In addition, Fidler pointed out, Budinger is German and so was in the interesting position of teaching in America about a project in Cuba. “She has an understanding of what it’s like to work internationally and across borders. It was so valuable to our students to have her input when they were asking themselves ‘Are these images accurate, and are we representing the culture properly?’”

A portion of the critiques of the three BGSU students’ work follows:

Asher: Regarding the first aspect it was surprising for us the use of so many elements that we find in our everyday life as well as in our own advertisements.

Cox: The color scheme varies from the traditional ones associated to Cuba, while the recognizable elements used in the design are treated with freshness and they pretty much look like the ones we find in urban areas of Cuba. The arrangement is interesting, apparently loose but with a sense of order just like us here. It eludes the stereotypes with the illustration style.

Holtz: The dance sequence is very interesting, taking advantage of the footprints and goes very well with whole idea of a sequential projection. . . . To us it breaks right through the stereotype.

A specialist in typography, Childers has an interest in 3-D typography and international communication. He has kept in touch with Claudio Sotolongo, a faculty member at the Instituto Superior Desegno Industriel design school in Havana, since meeting him at the 2008 American Institute of Graphic Arts Cross Cultural Design X-Change called "Sharing Dreams 5" in Havana, and last year sent Sotolongo his students’ Christmas card typography design projects.

Sotolongo was BGSU’s contact for participation in the biennial 3-D show.