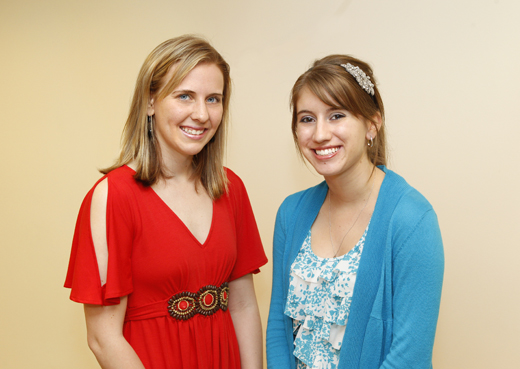 Leiss, who is an Alumni Laureate Scholar, has participated in a long list of leadership activities at BGSU. She was the assistant director of financial affairs for this year’s Dance Marathon, is a member of Alpha Omicron Pi, serves as a BGSU tour guide and has volunteered for a number of events including the Martin Luther King Jr. Day of Service Challenge.

“Megan has a long-term commitment to her leadership positions,” wrote Anna Lehnen, a graduate student in the Office of Campus Activities, in her nomination letter. “For example, she began working with Dance Marathon in her first year at BGSU and continues to work tirelessly to ensure successful management of the Financial Affairs Branch.”

Jeremy Wright, graduate hall director at Offenhauer Towers, praised Ike’s passion and dedication to her work and co-curricular involvements in his nomination letter.

As a student, Ike has gone above and beyond what might be considered a normal campus workload. In addition to being president of the Offenhauer Hall Council and a member of the Resident Student Association, she is part of Science and Math in ACTION, a scholarship program for students pursuing a teaching degree in math and/or science, a member of the Bowling Green and Ohio Council of Teachers of Mathematics, a Catholic Youth Organization coach for cross country and track, and a tutor and a volunteer for BG Teen Central and Martha’s Soup Kitchen.

Upon learning of her excellent public speaking skills, Dr. Daniel Brahier, director of Science and Math Education in ACTION, asked Ike to represent the program in a presentation to members of the Ohio Legislature. “She wrote an outstanding speech and delivered it with mastery to the legislators who visited BGSU that day,” he said.

In both her nomination letters, Minard, a resident adviser in Harshman Chapman-Dunbar, was commended for her commitment to the “culture of leadership” at BGSU.

“That Jessie has been invited to serve as a Resident Adviser for not one, but two years at this University speaks to her outstanding leadership abilities,” wrote Heath Diehl, University Honors Program. “Even more impressive is the fact that Jessie has managed to fare so exceptionally well in her position as Resident Adviser while maintaining her excellent academic standing within the Honors Program.”

Minard is also part of the Alpha Lamda Delta Honorary Society and the National Society of Leadership and Success. “Jessica has great pride in Bowling Green State University and her identity as a Falcon,” wrote Steven Syoen, residence hall director. “A woman like Jessica is one we can expect to be back on campus in a number of years speaking as a distinguished alumna of BGSU.