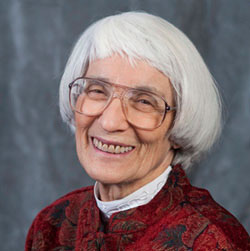 BOWLING GREEN, O.—Bowling Green State University will present an honorary doctorate in Social Justice in Sport and Education to Dr. Bernice Sandler, widely known as the “godmother of Title IX,” during commencement exercises for the College of Education and Human Development at 3 p.m. May 5 in the Stroh Center. Sandler has spent her career advocating for equal opportunity for women and girls.

She has had a direct impact on BGSU, visiting several times to share her expertise with students, faculty and staff, and appeared in a documentary produced by WBGU-TV on the history of Title IX.

At the start of her advocacy career, she worked closely with BGSU alumna Elizabeth Boyer, an attorney and founder of the Women’s Equity Action League, which was a primary force rallying support for women’s rights and the passage of Title IX.

Although most notably associated with sports, as part of the Education Amendments of 1972, Title IX actually covers all aspects of education, mandating equal access and opportunity. Before the enactment of Title IX, less than 10 percent of students receiving degrees in medicine and law were women, and fewer than a quarter of doctoral degrees were granted to women. It was a common and acceptable practice for schools to set quotas limiting the numbers of women in academic programs.

The impact of Title IX on sport has been monumental. In 1971, only 1 in 27 high school student athletes was female; today, it’s 1 in 2.5. Also, before Title IX, virtually no women received athletic scholarships to college; today, athletic grants-in-aid to female athletes are common.

Now the Senior Scholar in Residence at the Women’s Research and Education Institute in Washington, D.C., Sandler faced a world that was not welcoming to female academics when she completed her Ph.D. at the University of Maryland in 1969. She fought to enforce a 1967 executive order from President Lyndon Johnson that prohibited sex discrimination in organizations that received federal contracts, filing sex discrimination complaints against 250 institutions under his executive order.