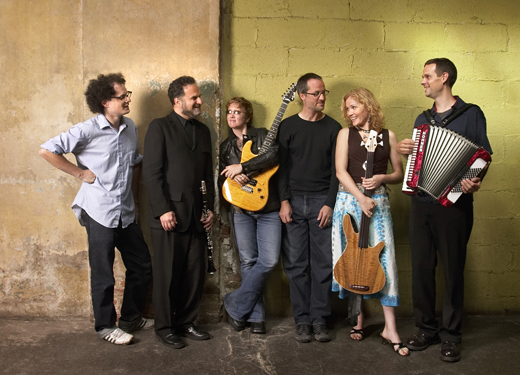 BOWLING GREEN, O.—The 2012-13 Festival Series at Bowling Green State University aims to “encircle the world” with a variety of artists who will share music of ethnic origin and artistic excellence.

The series opens on Sept. 29 with Klezmer Madness! As one of the foremost musicians of the vital new wave of klezmer, clarinetist David Krakauer tours the globe with his celebrated ensemble. Firmly rooted in traditional klezmer folk tunes, the band “hurls the tradition of klezmer music into the rock era,” said Jon Pareles of The New York Times.

Krakauer is both a master of Eastern European Jewish klezmer music and a major voice in classical music. He has appeared with the Tokyo, Kronos, Orion, and Emerson string quartets, plus as soloist with orchestras internationally. In December 2009 he premiered a new, klezmer-inspired concerto written for him by the young Polish composer Wlad Marhulets. Major appearances of Klezmer Madness! have included Carnegie Hall and the Venice Biennale.

Begin the holiday season on Nov. 30 with New York Polyphony (NYP) in its program, “I Sing the Birth.” Establishing a reputation as one of the world’s finest a cappella vocal ensembles, NYP was praised for a “rich, natural sound that’s larger and more complex than the sum of its parts” by National Public Radio.

The four men of NYP apply not only refined musicianship and interpretive detail but also a uniquely modern sensibility to their varied repertoire, which ranges from austere medieval melodies to cutting-edge contemporary works. Hailed as a “stunning tour through chant, polyphony and renaissance harmonies” by Minnesota Public Radio, the group’s most recent CD, “Tudor City,” spent three weeks in the Top 10 of Billboard’s classical album chart. The ensemble has participated in major concert series and festivals throughout the U.S., Mexico and Europe. NYP has been heard on Public Radio International, Minnesota Public Radio, and National Public Radio. Recent engagements include a residency at Dartmouth College and the premiere of “Missa Charles Darwin,” a newly commissioned secular Mass setting based on texts of Charles Darwin by composer Gregory Brown, at a TEDx event in Woods Hole, Mass. In December 2011, New York Polyphony made its national television debut on “The Martha Stewart Show.”

Greg Anderson and Elizabeth Joy Roe join the series on Feb. 9, 2013. They are perhaps the most thrilling young piano duo performing today, offering adrenalized classical concerts that are revolutionizing the duo experience for the 21st century. Described as “Fred Astaire and Ginger Rogers transposed from the dance floor to the keyboard” by The Southampton Press and “the intense synchronization of genius” by ThirdCoast Digest, the Steinway Artists bring their joyous camaraderie and refined artistry to the concert stage as a four-hand and two-piano team.

Graduates of The Juilliard School, Anderson and Roe are featured on the “Sounds of Juilliard” CD celebrating the school's centennial year. The duo has appeared on NPR and MTV, toured extensively across North America (and beyond), and performed in nearly every New York City venue imaginable, from Carnegie Hall to children’s hospitals. The duo released their debut album, “Reimagine,” in 2008, and their music videos have been viewed millions of times on YouTube alone.

In honor of Black History Month, celebrate the Negro spiritual on Feb. 23 with the American Spiritual Ensemble. Comprised of some of the finest classically trained singers in the United States, the ensemble’s mission is to keep the American Negro spiritual alive. Since its inception by Dr. Everett McCorvey in 1995, its vocalists have thrilled audiences around the world with their dynamic repertoire ranging from spirituals to classical to jazz and Broadway numbers highlighting the black experience.

The American Spiritual Ensemble is unique in that over 90 percent of the members are accomplished soloists who have sung in theaters and opera houses world wide. The resulting sound of this group is something that choral groups with two or three featured soloists cannot duplicate.

Legendary South African trumpeter Hugh Masekela closes the series on April 3. An innovator in the world music and jazz scene, active as a performer, composer, producer and activist, this iconic artist is best known for his integral role in Paul Simon’s tour behind the classic album “Graceland.” Masekela’s Grammy Award-winning hit “Grazing in the Grass” sold over 4 million copies and made him an international star. He has collaborated with numerous artists in the U.S., Africa and Europe including Miriam Makeba, Dizzy Gillespie, Harry Belafonte and Herb Albert. Masekela also co-created the Broadway smash musical “Sarafina” that introduced the sounds and passion of South African music to theater audiences worldwide.

Masekela’s work as an activist raised international awareness of the South African government’s restrictive apartheid policies. In the 1980s, Masekela’s hit song “Bring Him Back Home” became an anthem for the Free Nelson Mandela movement. Articulate and brilliantly musical in a number of genres, Masekela has been a defining force in world music and the struggle for human rights both in Africa and around the world.