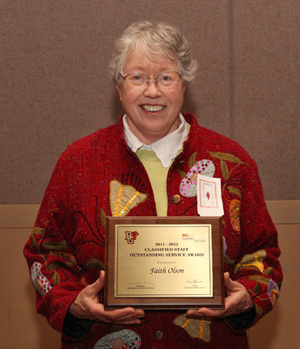 BOWLING GREEN, O.—From working on behalf of her fellow Classified Staff members to making sandwiches for volunteers, there isn’t much Faith Olson is not involved with at Bowling Green State University.

The fiscal officer in the College of Education and Human Development, Olson is known for her volunteer work.  Nominators pointed out she had contributed over 400 volunteer hours in 2011 alone, just for Classified Staff-related issues and events.

“Faith is a leader by example,” wrote Terry Carver, administrative secretary in the Department of Recreation and Wellness, in her nomination letter. “Her commitment to BGSU at all levels is hard to top. She gives 100 percent and then some at every opportunity presented her.”

This award is just one of many accolades Olson has received in the past year. In April 2011, she received the Friend of the Office of Service-Learning and Civic Engagement Award for her work in establishing a sack lunch program for MLK Day of Service volunteers.  In January 2012, the Human Relations Commission for the city of Bowling Green gave her the Drum Major for Peace Award in recognition of her commitment and dedication to the community.

Her work at BGSU knows no bounds. Olson is chair of the Leave Bank Committee, works on fundraisers for Classified Staff scholarships, maintains a memory garden by the Education Building dedicated to her parents and is also pursuing her doctorate at BGSU.

“Faith is a ‘die hard’ advocate for BGSU, the college and for any classified staff member who is in need,” wrote Dr. Brad Colwell, dean of the education college, in his nomination letter. “Her commitment to justice and basic fairness is unmatched. She works to make sure everyone is treated fairly, but will also encourage those not doing their part to meet the expectations set before them. In sum, she is an example of integrity and hard work that serves as a positive example to all.”