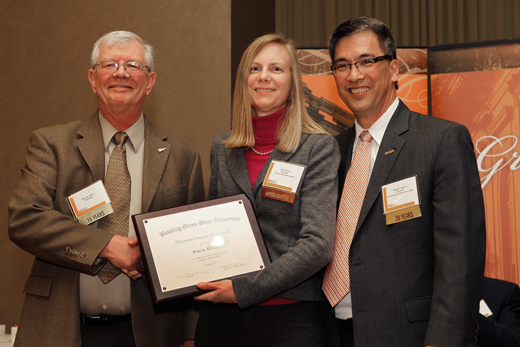 In recognition of her efforts, BGSU presented her a $2,000 cash award and a reserved parking space for a year. The award is presented by the Office of Sponsored Programs and Research.

Brown joined the sociology department at BGSU in 1998 and has become a visible leader in the field. In the last three years she has published articles in the top family and demography journals, won the 2011 American Sociological Association Family Section Article of the Year Award, published four book chapters and appeared in top media outlets such as USA Today, Forbes, The Today Show, NPR and The New York Times.

Brown is also the founding and current co-director for the National Center for Family and Marriage Research (NCFMR), which is supported by a cooperative agreement from the U.S. Department of Health and Human Services.  The NCFMR is the only federally supported research center on family and marriage.

“The development and maintenance of the Center showcases Susan’s creativity, vision and keen insights, which have ensured that the Center has been a success,” said Dr. Wendy Manning, a professor of sociology and co-director of the NCFMR, in her nominating letter.

“Only a very small proportion of sociologists have research achievements that are comparable to those of Susan Brown,” said Dr. Alan Booth, Distinguished Professor of Sociology, Human Development and Demography at Pennsylvania State University, in his nomination letter. “Susan is a premier scholar whose research accomplishments embrace all aspects of generating the very best science.”

Manning also praised Brown for her positive outlook and enthusiasm, her role as a mentor within the department and her leadership skills.

“She is extremely generous with her time and has created opportunities for her colleagues and students,” Manning said. “Her energy and dedication to success have elevated the work of her colleagues at BGSU.”