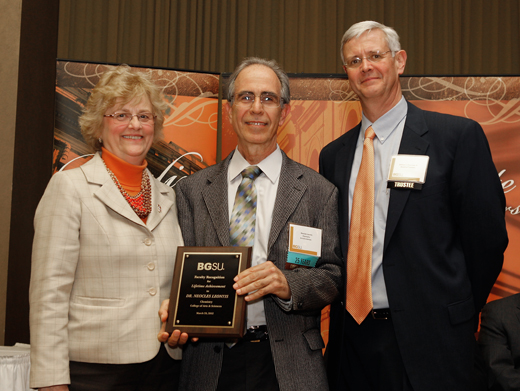 His dedication was recognized March 29 with the Lifetime Achievement Award at BGSU’s Faculty Recognition Dinner and with it, a $1,000 cash prize and commemorative plaque.

Leontis’s list of University and community involvements is lengthy. He served as chapter president of Phi Beta Kappa twice and was chair of a committee promoting undergraduate research. He wrote the committee’s report, which led to the establishment of the Office for Undergraduate Research. He has served as the chair of Faculty Senate and has been a member of the President’s Committee on Vision and Values and the Faculty Welfare Committee. Outside BGSU, Leontis is a reviewer for National Science Foundation grants and a number of professional journals.

He is currently collaborating with Dr. Steve Cady, an associate professor of management, to increase awareness of evidence-based methods for improving teaching and learning as well as working with Dining Services to promote healthy dietary practices on campus and in the community.

“He is constantly discovering new information, and more importantly, new ideas. But few are as ready and able as Neocles Leontis to convert ideas into action,” said Dr. Geoffrey Howes, professor of German, Russian and East Asian languages, in his nominating letter.

“Neocles is an extremely active researcher, supervising and supporting the research of master’s and Ph.D. students and also maintaining an experimental research group that he supervises himself,” said Dr. Craig Zirbel, an associate professor of mathematics and statistics. “Neocles reads incessantly and is always cognizant of the best directions to move our research so that it makes the biggest impact for the molecular biology community.”

Leontis joined BGSU in 1987 as an assistant professor of chemistry. He earned his bachelor’s degree at Ohio State University, his master’s degree at Harvard and his Ph.D. at Yale.

In 2006, he received the Olscamp Research Award, which is given annually to a faculty member for outstanding scholarly or creative accomplishments during the previous three years.