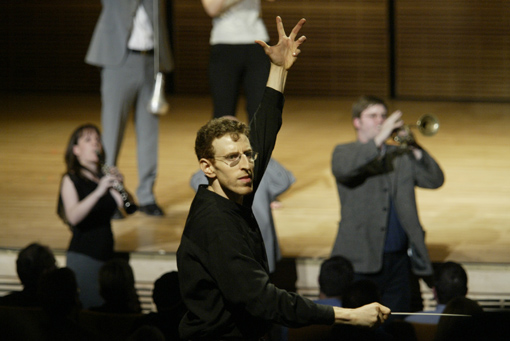 BOWLING GREEN, O.—Northwest Ohio audiences will not have to travel to New York City’s Lincoln Center to see one of the country’s most innovative chamber ensembles. Alarm Will Sound will perform at Kobacker Hall in Bowling Green State University’s Moore Musical Arts Center at 8 p.m. March 28.

The ensemble is an appropriate choice to close out this season’s Festival Series, which has been themed “Exploring New Limits.” Alarm Will Sound is devoted to playing a range of challenging music, from the very modern to the pop-influenced.

The 20-member ensemble — in some ways more like a small orchestra — is one of the first classical groups to play certain pieces from memory and to move about the stage, breaking the bounds of the traditional, seated crescent arrayed around the conductor.

The versatility of Alarm Will Sound allows it to take on music from a wide variety of styles. Its repertoire ranges from European to American works, from the arch-modernist to the pop-influenced. The BGSU program will include works by electronica composer Aphex Twin, John Adams, John Cage, and John Orfe’s “Dowland Remix,” which the group has performed in Berlin to critical acclaim.

Alarm Will Sound’s BGSU residency is in partnership with the MidAmerican Center for Contemporary Music and, in addition to the concert, will include an open rehearsal, readings of works by student composers, and a question-and-answer session.

Member Alan Pierson will be at the free, pre-concert talk at 7:15 p.m. in Bryan Recital Hall prior to the Festival Series performance to discuss the program. In addition, the 2012-13 Festival Series lineup will be announced that evening.

Group tickets are available. BGSU students can take a canned good to the Student Union for a ticket to the concert, courtesy of the Office of Student Affairs. For tickets, call the Moore Center box office at 419-372-8171 or email musictickets@bgsu.edu.