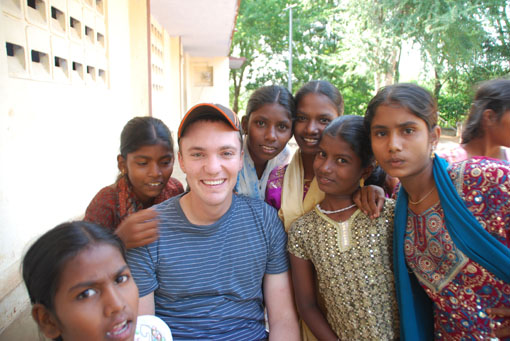 BOWLING GREEN, O.—It’s been a hectic few months for Skyler Rogers, a Bowling Green State University senior from Kenton majoring in marketing and entrepreneurship. In November and December, Rogers traveled through India and Kenya as part of a BGSU Stuart R. Givens Memorial Fellowship. A month later he helped launch NiceShirt.org, a website that supports nonprofit organizations and social causes in need.

The Givens Fellowship provides up to $6,000 to a BGSU undergraduate to support a self-designed, off-campus experience in a manner not otherwise possible through an academic program, regular summer job, enrichment program or study abroad program.

Rogers met with a cross section of people during his travels in the two countries—from entrepreneurs who are creating sustainable solutions to the problems in India and Kenya, to the very poor.

“I moved between the rural and urban areas of both countries and tried to meet as many people as I could,” Rogers said. “I saw firsthand so many issues that are happening. That was the inspiration for the business. NiceShirt.org teams up with causes that could use more awareness and funding. We sell apparel that is related to that cause and donate money for each piece sold.”

The idea for NiceShirt.org was planted shortly after TEDxBGSU in September, a regional version of the popular TED conference that Rogers spearheaded.  He, along with David Cullen, a senior at BGSU majoring in marketing, and Wes Parsell, a graduate student in the College of Technology, launched the site at the end of January.

"We’re not trying to re-tackle some of the big issues, but support some of the best that are doing it, whether it’s overseas or right here in the U.S.”

“It’s a really exciting time. Our first campaign was for an organization called Stop Hunger Now. We raised enough money in a week to donate 1,800 meals. Since then we’ve also raised $1,500 to help wounded soldiers.”

Thanks to social media, word is spreading fast.NiceShirt.org has shipped orders to over 37 states and Afghanistan.

Rogers says he applied many lessons from his Givens trip to this new business. Contacts he made are now giving him advice on how to approach the company and offering suggestions on the types of products offered.

“There’s a huge difference between talking about a business and actually running it,” Rogers explained. “You put in work and more work, but there’s always something that needs to be done to improve and change. It’s a never-ending process, which is exciting.  There’s a lot of changing and growing.”

Visitors to NiceShirt.org will find an “apply” button. Anyone can fill out a form to nominate his or her organization, or another organization. The applications are reviewed, background research is done and a decision is then made on whether to feature them on the site.

“There are a lot of people working to make things better around the world. I could start my own nonprofit, but that would be redundant.  We’re not trying to re-tackle some of the big issues, but support some of the best that are doing it, whether it’s overseas or right here in the U.S.”