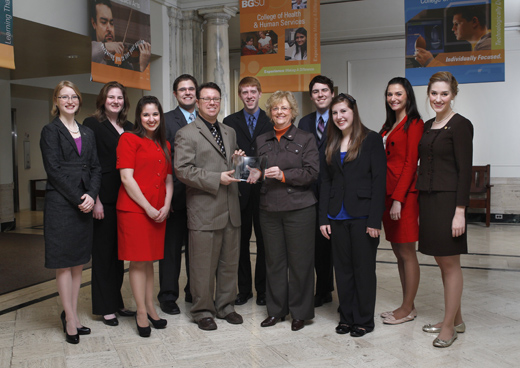 BOWLING GREEN, O.—Bowing Green State University’s Falcon Forensics and Debate Team proved once again it is one of the top teams in the country. For the first time in school history, the team placed in all six team divisions at the National Comprehensive Tournament (NCT) held March 15-19 in Kansas City, Mo.

Nicholas Blaine, a senior from Sylvania, and Rachel Rine, a junior from Bowling Green, both placed in Pentathlon, which makes them two of the top 10 overall speakers in the nation. Blaine also received a second place in To Honor Scholarship.

Spencer Colie, a freshman from Heyworth, Ill., placed second in the nation in Informative Speaking.

This year’s national success concludes an outstanding season where BGSU earned top team honors at 14 tournaments in a row, from Boston to Tennessee. Every one of BGSU’s team members qualified for nationals in at least two events.

“This was an amazing season, especially since our team is so young.” said Paul Wesley Alday, director of forensics and an instructor of interpersonal communication at BGSU. “Eighty percent of our team members are freshmen and sophomores, which makes the future look exceptionally bright for the program.”

The team will showcase its national award-winning performances at 7 p.m. April 11 in 111 Olscamp Hall. The free event will feature the national champion Reader’s Theatre and speeches from state and national finals.

Forensics and Debate is a co-curricular, competitive program offered through the School of Media and Communication and Department of Communication.