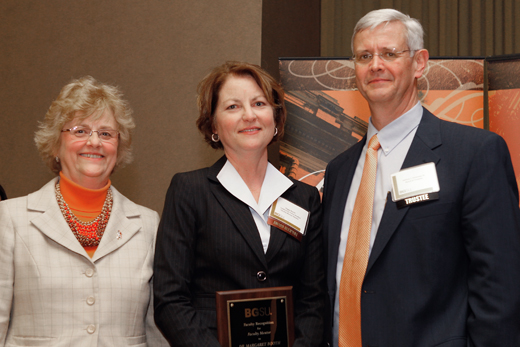 BOWLING GREEN, O.—When in 2002 it was time for Dr. Jean Gerard, an associate professor of human development and family studies at Bowling Green State University, to choose a faculty mentor, she took the unusual step of reaching out to someone outside her discipline.

Dr. Margaret (Peggy) Booth, a professor and now director of the School of Educational Foundations, Leadership and Policy, had worked with Gerard for two years on a committee, and “I was impressed with her work ethic and professional accomplishments, so she was a natural choice,” Gerard recalled. “Over the years I have come to view Peggy as a professional mentor, research associate and a trusted colleague.”

Now, 10 years later, Booth has received the Faculty Mentor Award in honor of her dedication to helping junior faculty. The commemorative plaque, along with $1,000, was presented to her by Faculty Senate at the Faculty Recognition Reception March 29.

She has been helpful in the areas of progression toward tenure, Gerard said, and “in the teaching domain, Peggy made a visit to one of my classes and conducted a peer review. I was impressed by the seriousness with which she approached this task but even more so by the depth of her written evaluation and eye for detail in the classroom—a reflection of her expertise as an educator and evaluator of sound teaching practices.”

That Booth has also “willingly and enthusiastically reached out to several untenured faculty members in the Educational Foundations and Inquiry program is a testament to her value as a mentor,” Gerard noted. Apart from formal mentoring practices, she offers informal guidance and general career advice as well.

“Peggy’s model of mentorship is marked by balance: she gives feedback in the context of praise, she offers suggestions without being overbearing, and she extends support generously to new faculty members without promoting self-interests. Peggy epitomizes what a good mentor should be,” Gerard wrote.

Booth has been director of the School of Educational Foundations, Leadership and Policy since 2011. A specialist in educational psychology and international comparative education, she joined the faculty of the educational foundations and inquiry department in 1997 and led the effort to establish the Master of Arts in Cross-Cultural and International Education program, which in 2008 was designated a Peace Corps Fellows program.