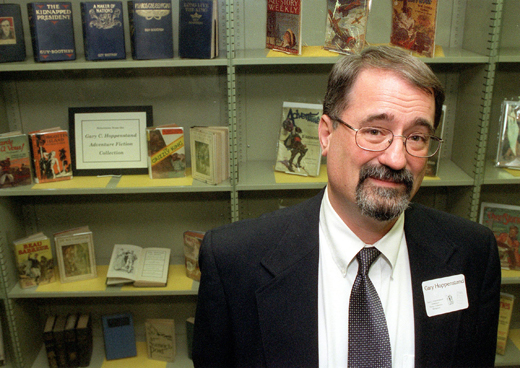 BOWLING GREEN, O.—Their names aren’t familiar today, but in the early part of the 20th century Frederick Irving Anderson, George Randolph Chester and Leonard Nason were considered three of the most popular writers of the time.

A number of extremely rare items related to these authors are now located in The Ray and Pat Browne Library for Popular Culture Studies at Bowling Green State University. The works, a donation from Dr. Gary Hoppenstand, a BGSU alumnus and professor of American Studies at Michigan State University, will be added to the Adventure Fiction Collection that bears his name.

“I studied with Ray Browne and was very close to him,” Hoppenstand said. “The Ray and Pat Browne Library for Popular Culture Studies was very important to me for research as a student and continues to be important. It collects and preserves materials that a lot of libraries don’t have access to— it’s just too ephemeral, and libraries just don’t collect it for scholars and research.”

“As I’ve done work in popular fiction, I’ve made sure that rare items I’ve hunted down went to a place that would house them well and provide the best place for people to use them. BGSU was the obvious choice.”

Anderson and Chester were important writers of crime fiction in the 1910s and 1920s and Nason was considered the most important American writer of World War I fiction. Hoppenstand donated near-complete collections of their books as well as fiction appearances in magazines. Several books in the donation, including a signed first edition of Anderson’s “The Notorious Sophie Lang” and a presentation copy of Chester’s “Get Rich Quick Wallingford,” are the only existing copies.

“This is the best collection of these writers,” explained Hoppenstand. “Chester, who is unknown today, was very popular at the turn of the 20th century and was also an early director of movies in the silent era. He would be considered the John Grisham of his time.

“Works by Anderson are even harder to find. I was doing research on the thief protagonist in crime fiction and he developed Sophie Lang, one of the first female master criminals. This collection is a great example of the American culture of the period and shows not only the history of fiction, but the history of literature.”

The donation also includes a rare copy of a children’s book by Chester and signed letters from Nason, Chester and pulp author Robert Sidney Brown, along with a manuscript edition of O’Henry’s works, a collector’s edition of P. G. Wodehouse's novels, and numerous works by 19th and 20th century authors in the adventure genre.

“As I’ve done work in popular fiction, I’ve made sure that rare items I’ve hunted down went to a place that would house them well and provide the best place for people to use them. BGSU was the obvious choice.”