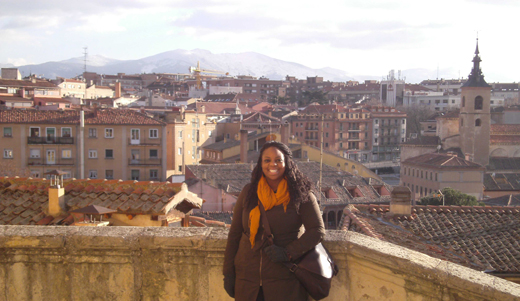 BOWLING GREEN, O.—The last two years have been an eye-opening experience for Alesia Hill, a Bowling Green State University senior from Pickerington majoring in journalism. Hill was picked to participate in the LIN Media Minority Scholar and Training Program in 2010 and is nearing the end of her two-year internship period. Winners receive scholarship money, paid internships at LIN Media television stations and a job after graduation.

Her first internship was at WDTN, the NBC affiliate in Dayton, where she got a broad understanding of all the aspects of a commercial news station. Hill spent time in sales and promotions as well as the news department.

“At the end of it I knew I still had a passion for news, but after seeing the daily grind, I was questioning my desire to be a reporter,” she said.

Hill’s next internship kept in her northwest Ohio. She started out in the newsroom at FOX Toledo, and then moved to the sales department. She shadowed account executives and learned about the sales cycle and the importance of building relationships with clients.

“I learned how everything in a news station is interconnected and each entity’s success depends on the other. Sales was a wonderful learning experience, but by the end of the summer, I was back in the newsroom.”

Hill originally intended to graduate in December 2011, but opted to spend this semester studying abroad in Spain to improve her Spanish language skills.

“Right now I am living in Alcala De Henares. Coming to Spain was the perfect way to finish out my college career.”

Hill will graduate in May and then work for LIN at one of its news stations.