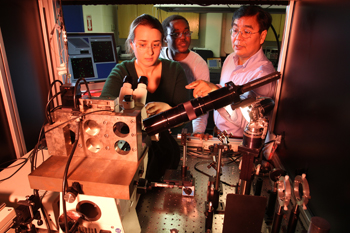 BOWLING GREEN, O.—It’s a small, small world that Dr. H. Peter Lu, Ohio Eminent Scholar and professor of chemistry at Bowling Green State University, studies. An expert in biochemical nanoscience, he narrows his focus down to the motions and properties of single molecules of proteins and enzymes as they perform their biological functions. The new knowledge he and his team are generating is gaining international notice.

“We are trying to obtain molecular-level understanding of protein function and dysfunction related to disease diagnosis and treatment and drug development,” he said.

Using sophisticated equipment and techniques he and his team have pioneered, they can observe and measure the interactions of single molecules of enzymes with other enzymes and proteins to gain a better understanding of complex metabolic processes over time.

In addition to investigating biomedical applications, they are also using their ability to examine single molecules to learn how nature is able to convert solar energy into electricity. This basic-science development project will study why some materials are more efficient at energy conversion than others, and how proteins in the photosynthetic membrane are working, Lu said.

A senior editor for the journal Nano Reviews since 2009, Lu has been invited to serve on two committees: as a review panel member for the Center for Functional Nanomaterials at Brookhaven National Laboratory and, next August, as a member of the International Advisory and Program Committee for the 12th International Meeting on Hole Burning, Single Molecule, and Related Spectroscopies: Science and Applications, in Tubingen, Germany.

He and his fellow researchers had seven publications in 2011 in prestigious journals such as the Journal of the American Chemical Society, the Journal of Physical Chemistry, Langmuir, and Angelwandte Chemie International, from Germany. Three additional manuscripts are under review.

Lu was invited to write a perspective for Science magazine on single-molecular enzymology and protein dynamics, scheduled to come out early this year. He also had a chapter published in the proceedings of the 2010 Nobel Symposium on Single Molecule Spectroscopy in Chemistry, Physics and Biology.

Lu joined the faculty in Photochemical Sciences in 2006 and is passionate about training students and exposing them to the higher horizons of scientific research and education. “We are training the workforce for science and technology research the nation will need,” he said.