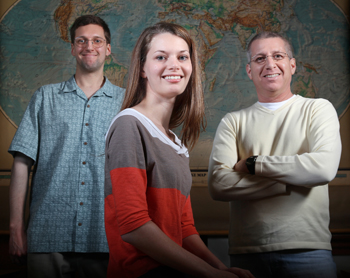 BOWLING GREEN, O.—She didn’t have much time to prepare, but the opportunity was too good to pass up. When the telephone call came on Jan. 6 saying she had been chosen for an internship with the National Geographic Society in Washington, D.C., Erynn Truex decided to go, despite the fact that the semester was to begin that Monday and she would have just one week before she had to leave.

“I had always wanted to work for National Geographic,” the senior geography major from Tallmadge, Ohio, said. “I admired the broad perspective on people and the environment that they present, and I thought that contacts made there would be helpful, even later in life. There were over 100 applications for only 30 positions over three semesters.”

So she had kept an eye out for internship notices and when one came up last October she sent in the required documentation, essays and recommendations. These included letters from Dr. Art Samel, geography chair, and geography faculty members Drs. Ted Eckmann, Karen Johnson-Webb and Enrique Gomezdelcampo.

Not only did Samel enthusiastically endorse her, but once she received the internship, he “was extremely helpful,” she said. “Dr. Samel helped me rearrange my courses so I could keep my scholarships while doing my internship and still graduate on time.”

“We’re really pleased for her. Erynn is a great student, and she’s the first student in our department to get a National Geographic internship,” Samel said. “The world is her oyster right now.”

Eckmann agreed. He came to BGSU from the University of California – Santa Barbara, where he mentored several students who went on to the highly selective National Geographic Society internships, one of whom is now employed there. Another is an urban planner with Los Angeles County.

“National Geographic people keep in close contact with one another; they have a strong networking program. I’ve met former students at professional geographers conferences,” Eckmann said.

One likely factor in her favor in being chosen was that Truex participated in BGSU’s GeoJourney program as a freshman. In addition, Eckmann said, “She is genuinely interested in understanding and applying the material. She has participated in an in-depth, research project doing data analysis and reports. Geographers must solve real-world problems that require a broad understanding in a lot of areas.”

Truex has also been a teaching assistant in the department, a student clerk in Admissions and an active member of the Geography Club. In his recommendation letter Samel wrote, “I believe that Erynn possesses a high degree of maturity and extremely strong leadership qualities for an undergraduate student” that would make her a good member of the Geographic’s leadership team.”

She begins her internship today (Jan. 23) and promises to keep us posted.