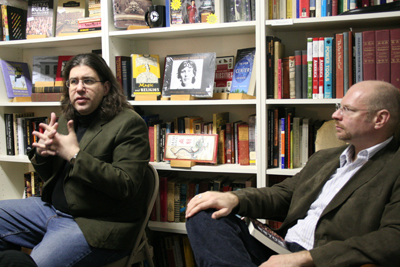 BOWLING GREEN, O.—Music has been described as the “universal language,” even apparently the harsh sounds of heavy metal. This seems to be borne out by the pervasive popularity of the genre over the last four decades. A new book co-written and edited by Bowling Green State University popular culture associate professor Dr. Jeremy Wallach, “Metal Rules the Globe: Heavy Metal Music Around the World,” traces it from Easter Island to Nepal and China to Madagascar, Brazil and beyond.

Published by Duke University Press, “Metal Rules the Globe” is the first academic book to bring together metal scholars in an examination of what is common and what is unique about the way in which heavy metal is interpreted in such disparate environments. Wallach and his co-editors Drs. Harris Berger, a professor of music at Texas A&M University, and Paul Greene, an associate professor of musicology and integrative arts at Pennsylvania State University, Brandywine, are themselves fans in addition to being scholars of the genre.

That in part explains how it was that, when in August of 1998 Wallach was invited to join in a rehearsal of a student group playing traditional, Northern Malay Islamic music on the campus of Malaysian National University, they spontaneously broke into Metallica songs, to which they all knew all the words.

Wallach was prompted to write “Metal Rules the Globe” after the ongoing success of his first book, “Modern Noise, Fluid Genres,” about the popular music scene in Indonesia. His research there and elsewhere revealed a potent subculture of metal fans that had never been documented. His scholarship has resulted in his recently being invited to the Harvard Project for Asian and International Relations conference as a panelist on “The Rise in Asian Popular Culture and Its Impact on International Diplomacy."

However, there is a fair amount of scholarship by women on metal music, which is well represented in the book.

The metal scene was assumed by many in the U.S. to have disappeared about 1992. In reality it went underground and thrived, moving around the world first through tape-trading networks and in cutout bins and later by way of the Internet.

Except for a “moral panic” in the 1980s about metal’s potential to trigger antisocial behavior, Wallach said (describing it instead as a “healthy outlet for aggression and justified anger”), in the United States and Europe heavy metal has been largely uncontroversial. But in some other countries being a metalhead can be downright dangerous.

“Fans of this music are willing to risk government harassment, societal ostracism, even prison and torture,” Wallach said. “Heavy metal is outsider music no matter where it is. Its fans see themselves as proud pariahs.”

While it is never overtly political, it does speak against hypocrisy, repression of individual freedom and cultural imperialism. It spans cultures, class and religions, and its subgenres are nearly endless. An Indonesian fan said it “releases the voice of the heart.” A Chinese fan described first hearing it as “like waking from a dream.”

“This book is a small slice of what has become an important cultural phenomenon.” Wallach said.