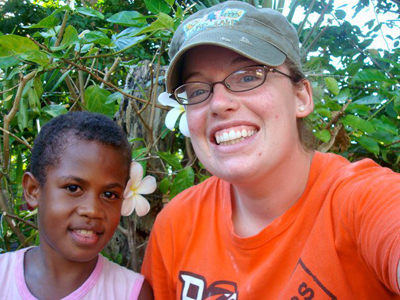 Amanda Buchert with one of the children of Vanuatu.

BOWLING GREEN, O. For the second year in a row, Bowling Green State University has made it onto the Peace Corps’ list of top universities producing volunteers. This year, BGSU moved up from 25th to 21st, with 24 alumni currently serving. The University is also ranked fourth in the state for the number of Peace Corps volunteers.

Alumna Amanda Buchert is one of those volunteers. The 23-year-old from Midland, Mich., is currently serving in Vanuatu, South Pacific, as a Teacher Trainer Volunteer. Buchert graduated in 2010 from BGSU with a degree in early childhood education.

Buchert says she first heard about the Peace Corps in the ninth grade, but thought she could never do it. Her attitude changed after spending six months abroad in the 12th grade. “I realized that I could do whatever I wanted to do, including Peace Corps. Then throughout college the idea just grew and grew and grew until I applied during my junior year.

“At BGSU, I was involved in International Careers Network, which brought in a Peace Corps representative once a year to give a talk about Peace Corps,” Buchert explained. “I also, of course, saw all the Peace Corps posters around and got excited every time I saw one! My professors also helped me by letting me out of class the day I went to the Chicago office to do my Peace Corps applicant interview.”

BGSU offers a Peace Corps Paul D. Coverdell Fellows graduate program in the area of International Education.  This unique graduate program allows Peace Corps volunteers who have completed their service the opportunity to attend BGSU to earn an advanced degree, with financial assistance and the chance to use their knowledge and skills in community internships as part of the program’s requirements.

Since Peace Corps was founded in 1961, 255 BGSU alumni have served.